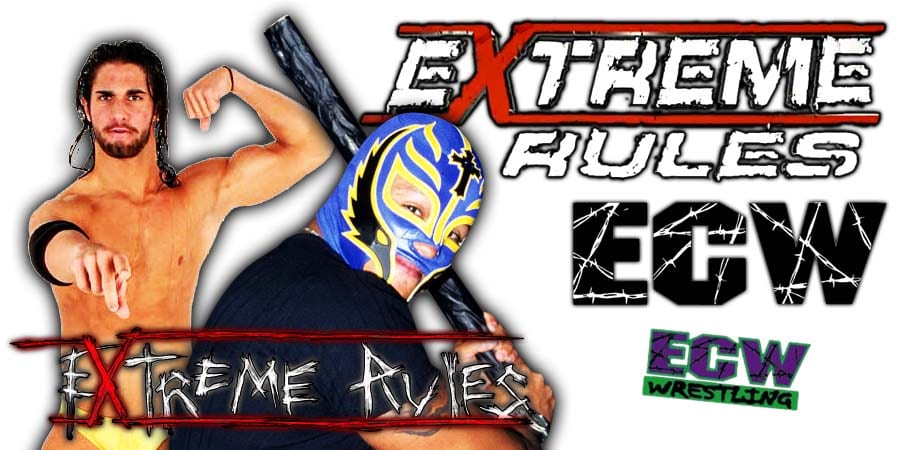 A special horror themed episode of the Firefly Fun House aired after this, where Bray Wyatt took a shot at the karaoke segment from SmackDown a couple of weeks ago and promoted the Wyatt Swamp Fight.

After this, the commentators announce that the scheduled United States Championship match between Apollo Crews and MVP will not take place as Crews isn’t cleared to compete from Bobby Lashley’s attack from over a month ago (kayfabe reason).

Up next is the “Eye For An Eye” match between Rey Mysterio and Seth Rollins.

After brutal back & forth action, Mysterio broke a Kendo Stick in half and stuck it in one of Rollins’ eye! Mysterio then hit Rollins with a 619 and is looking in control now.

Mysterio then hit Rollins with Rollins’ own finisher, The Stomp, on the floor outside!

Mysterio then grabbed Rollins’ head and pushed his eye into the edge of the steel ring steps, but that’s not enough and Rollins fires back with a knee to Mysterio’s face. Rollins then delivered a Stomp to Mysterio on the floor.

Rollins then drove Mysterio’s eye into the steel steps and the referee calls for the bell.

Seth Rollins def. Rey Mysterio in an “Eye For An Eye” match

Rollins is disgusted by what happened and vomited on the floor. Dominik and a doctor came out to help Mysterio get to the back.

You can watch Rollins vomiting below: