• The Undertaker Reveals The Truth Behind The Photograph With His “Grandmother”

For many years, a photo has been making rounds on the Internet, where The Undertaker is seen standing next to an aged woman.

Some people called her Taker’s grandmother, while some corrected others and said that’s Taker’s mother.

Below is the photo: 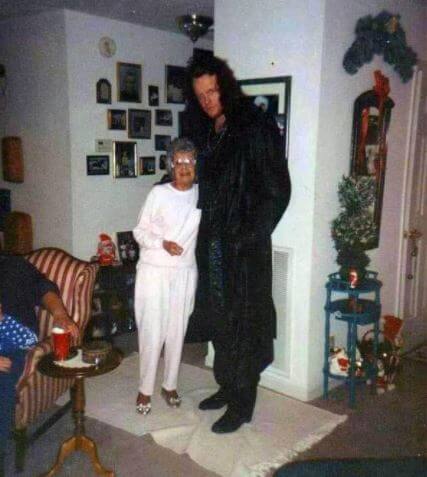 However, the truth is that lady isn’t related to The Undertaker whatsoever!

The Deadman was recently interviewed on the Out Of Character podcast, where he revealed the following:

“The funny thing about this is I have no clue who that is. I honestly have no idea who that is and why I’m in that lady’s house (laughs).

I have seen that picture many times, and it’s always either my mom or my grandmother – I got no clue.

If that was Nana, I’d at least have some kind of smile.”

Mark Calaway also revealed that his grandparents passed away before he became The Undertaker in 1990:

“By the time I became Undertaker, my grandparents had passed. So, I don’t know what they would have thought. But, yeah, I didn’t smile a lot.

Even in a lot of my family photos, my mom’s photos, all the brothers are there together there. I am stone-faced, and it became a part of me.”

3. The Viking (The Berzerker) vs. Danny Brazil