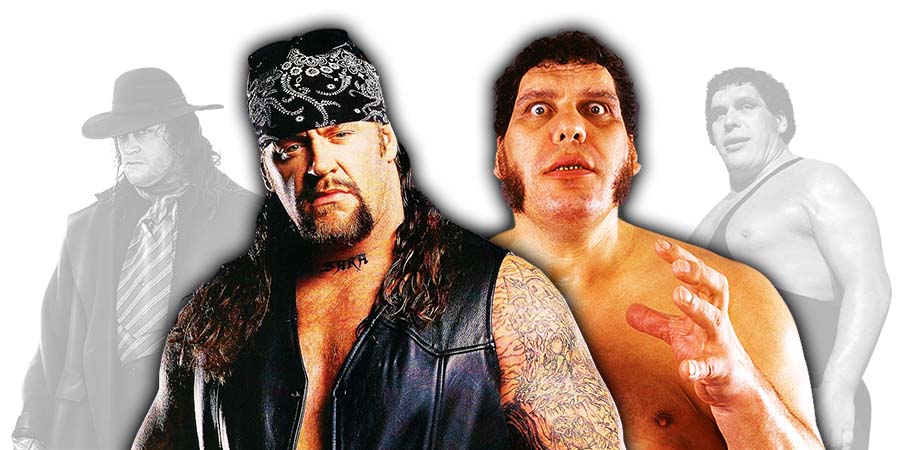 The Undertaker appeared on Ed Young’s ‘Wrastlin’ show this past weekend for a very interesting interview.

You can read the entire conversation from the show between Ed and Taker below (the complete video of this show is embedded at the end of this article):

UNDERTAKER: I can’t say that I was smart enough to have the presence of mind to do it. I got the call from Vince (McMahon). The call was something like this: Phone rings, I get up.

Vince – “Is this The Undertaker?”

Vince – (Laughing) All right then, can you be up here tomorrow?

That was Vince who called me. The original character was based on an old western Undertaker. At that time people were so just enthralled with it because it was so different. You know, most interview segments or the way the most wrestlers are talking was, you know, ‘let me tell you something.’

But I said I will talk very low. When someone starts to talk low, what do you do? You kind of lean forward. So I had their attention.

And then trying to keep the character relevant for this, you really have to keep your finger on the pulse of things. Because if you don’t, what usually happens is before you realize that you’re stale your audience has already moved on.

ED YOUNG: What would you say about keeping your finger on the pulse of things like that?

UNDERTAKER: Well, once I got to the WWE and then I kind of started to realize that we had something special with that character, I was never satisfied. I was like, ‘Okay we’re here and we’re getting a great reaction but what’s next.’

I’m always looking down the road, like, ‘I need something. I need to bring something new to the table but I got to be true to what my fan base and what my audience have accepted and this is what they want.’

But you also have to figure out ways to keep it fresh. You’re watching what everybody else is doing and you’re trying not to fall in. Because that happens so often in our business, you know, somebody will hit something and then like everybody’s trying to do the same thing.

I was fortunate in the sense that my character wasn’t that over-the-top. And that’s what separated me. I always had to keep an eye on what’s this guy (doing). Take Rock and Cena and Triple H and Shawn Michaels, Ric Flair (for example).

It is a business. You and there are so many guys that are are hungry and are trying to climb up that ladder. So if you kind of sit back like, ‘Yeah check this! I just sold out Madison Square Garden’ and you sit on that for a little bit, there’s somebody else climbing.

That was great. That era! You know, everybody was clawing, everybody was fighting for the brass ring. The 2000s, my goodness! The Attitude Era, it was insane.

Tap on the ‘Next’ button below to continue reading this article.