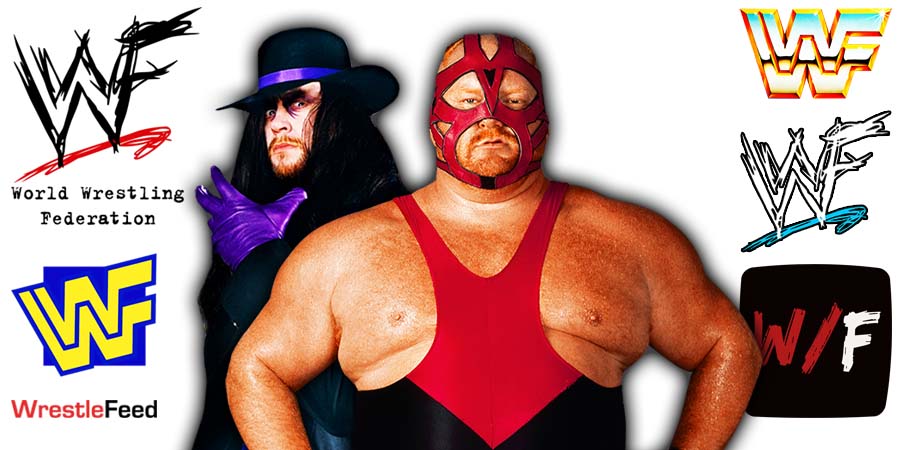 On April 11, 1997, Vader was arrested in Kuwait for grabbing a TV reporter after the reporter said that the WWF is fake.

He spent 10 days under house arrest and was ordered to pay a fine before he was allowed to fly home pic.twitter.com/si4LTq7gk3

During an interview with SHAK Wrestling, The Undertaker (who was also a part of this interview segment in Kuwait and was the WWF Champion at the time) revealed his reaction to the whole situation.

Below is what The Lord Of Darkness said:

“If it had happened over here, I think I would have been a little more aggressive. But I am trying to think, I think we might have been Kuwait. We were over there in the Middle East. I am just sitting there thinking, I’ve got my shades on. And I’m sitting there with the belt, and Vader, I could see it.

I could see it coming long before it ever happened, I am thinking to myself, ‘don’t do it Leon, don’t do it, he’s doing it, this is not going to be good.’

You don’t know when you’re in a foreign country what the ramification of putting your hands on somebody else is, right? You just don’t know, so you don’t put yourself in that situation.

I appreciate Leon, the fact that he was protecting his business. But there is a time when you have to be a little bit more vague. And you can say things a little differently.

But when you start putting your hands on people, it hadn’t turned out well for many people that decided to slap a reporter or grab somebody because they mark on your business.

I remember them whisking me out. When everything broke down, I remember Jerry Brisco grabbing me and like, ‘let’s get in a car, we’re getting out of here.’ I look back and I see Leon like, ‘Take, what do I do?’ I was like, ‘I’ll see you at the hotel, brother.’ Because I am getting pulled, I am physically getting pulled to get into the car before everyone gets arrested. We just didn’t know.

I knew that was going to be a bad decision right away and it was. He didn’t leave with us, he had to stay there for a week or so after we all left.”

During an episode of SK Wrestling’s The Bro Show, former WWF Writer Vince Russo recalled this incident and Vince McMahon’s reaction to it.

“When I was there, [Vader] was the buttend of everybody’s joke.

I’ll never forget – and this is an absolute shoot – do you remember when he was in Kuwait and got physical with that TV reporter? Bro, they threw his butt in jail.

I was at Vince’s living room table, working with Vince when he got the call from Vader. Bro, Vader was scared to death. He’s in prison in Kuwait. What do they do?

They’re not accepting his phone calls and they’re laughing about it like it’s a big joke.”

Vader revealed in an interview a few years before his death that the producer of the show told him to get physical with the host, as they wanted ratings and that the host was the producer’s friend.

“I was acting under orders from the producer, not the agent in charge. But when I did what I did, the interviewer was caught off guard and was frightened.

The cops were called and I went to jail. I took the heat.

But the point is that it was a skit. They wanted to use this thing to increase ratings, but it just wasn’t the case.”