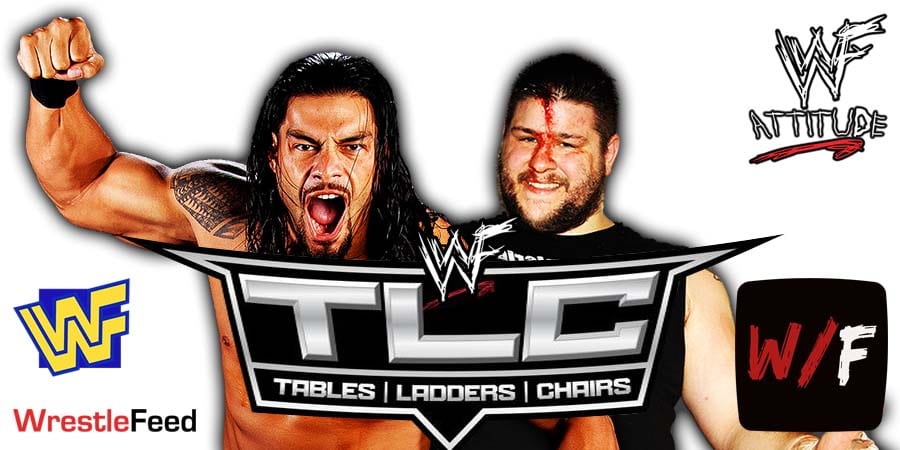 Up next is the second Tables, Ladders and Chairs match of the evening, and it is for the Universal Championship.

The match begins and Kevin Owens fires at Roman Reigns right away! Jey Uso tries to interfere, but Owens takes him out too. Jey is then helped to the back by WWE trainers.

Reigns comes back into the fight with vicious chair shots to Owens.

Reigns starts climbing up the ladder, but Owens stops him by delivering vicious chair shots to the back. Owens then suplexes Reigns on top of an open Steel Chair!

Owens climbs up the ladder and has the title in his hands, but Jey is back and grabs Owens’ leg. Owens beats up Jey and Reigns delivers a Superman Punch to Owens.

Owens hits Reigns with a Stunner! Owens then delivered a Pop-Up Powerbomb to Jey through the announce table!

Owens and Reigns are now fighting on top of a ladder, but both men climb down after a series of back & forth punches.

Owens goes for the Superkick, but Reigns caught his leg, picked him up and delivered a Powerbomb on a ladder!

Reigns is now climbing up the ladder without any sense of hurry. Owens gets in the ring and just holds Reigns’ leg. Reigns is not impressed and climbs down the ladder to talk down to Owens.

Owens slaps Roman and Roman fires back with a vicious Spear to Owens through a Table set up in the corner of the ring!

Owens is on his feet again outside the ring and Reigns goes for another Spear, but Owens moves out of the way and Reigns crashes through the barricade!

Owens stuns Reigns with two Superkicks and goes for the Pop-Up Powerbomb, but Reigns delivers a Superman Punch. Reigns runs the ropes and this time Owens hits a Pop-Up Powerbomb through a Table!

Owens is climbing the ladder again and almost unhooked the title before Reigns low blowed him. Reigns chokes out Owens on top of the ladder with the Guillotine Choke Hold and Owens falls down.

Reigns unhooks the Title and wins the match.