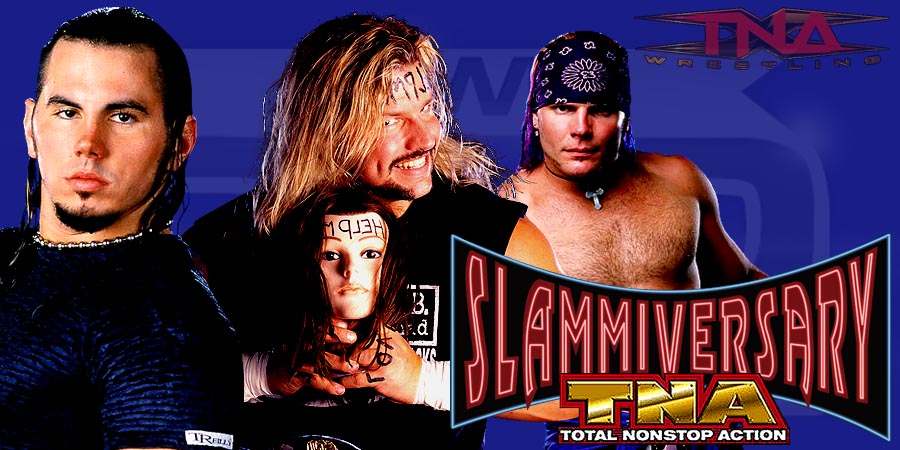 TNA Slammiversary 2016 is airing live from the Impact Zone in Orlando, Florida. Let’s start our coverage for the PPV:

The PPV begins with the whole TNA Impact Wrestling roster on the stage in a moment of silence for the victims of the Orlando Terror attack. Slammiversary opening promo is up next.

The first match of the night is a Fatal 4 Way match for the X-Division Title.

It is announced that the next TNA Hall of Fame inductee will be revealed this Tuesday on Impact Wrestling.

Due to Maria Kanellis being injured and unable to face Gail Kim, Billy Corgan has added Gail to the TNA Knockouts Title match, which now will be a Triple Threat match.

– Eli Drake def. Bram to retain the TNA King of the Mountain Title.

– Jeff Hardy def. Matt Hardy in a Full Metal Mayhem match. Jeff noted in a recent interview that he would outdo Shane McMahon’s WrestleMania 32 bump tonight at Slammiversary 2016, but he didn’t.

– Bobby Lashley def. Drew Galloway to win the TNA World Heavyweight Championship: During the ending moments of the match, Galloway was busted open but this didn’t stop him and he delivered a Tombstone Piledriver on Lashley. But Lashley didn’t go down as well. Lashley then made Galloway pass out to win the Title! “The Destroyer” Lashley is now a 3 time TNA World Champion.