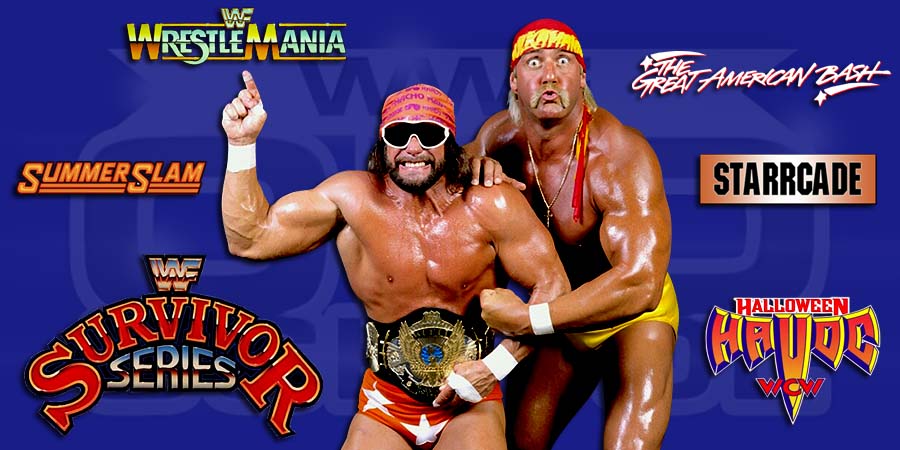 Welcome to another edition of Top Ten Things at WWFOldSchool.com, where I count down the ten best (or worst) classic wrestling matches, moments, PPVs, etc. Check out Enuffa.com as well, for more wrestling stuff!

Hey, who remembers a time when there wasn’t a PPV or “special event” every 2-3 weeks and wrestling promotions could actually build their big shows up for months at a time?

Back in the 80s during the dawn of PPV, most of the big matches took place at house shows and occasionally on free TV specials like Saturday Night’s Main Event. But a few times a year the WWF and the NWA would assemble a card so big and so special it could only be seen on TV if you paid for it. Initially the PPV calendar only included 1-2 shows, but by the end of the decade the WWF had established a Big Four, while the NWA expanded to five events. Here now are the top 10 Old School Wrestling PPVs from 1980s:

10. SummerSlam ’89
The sophomore SummerSlam holds a special place for me. It was far from a perfect show but at the time it just felt like a big deal, and from a star power perspective it was a pretty stacked PPV. I was at the Saturday Night’s Main Event taping a month prior when the company started building in earnest toward SummerSlam, so I really got into the hype for this show.

The main event was like an updated version of the ’88 edition except now Hulk Hogan and Randy Savage were on opposite sides, tagging up with Brutus Beefcake and Zeus, respectively. The match was similar in tone to the previous year’s main event – lighthearted, with a feelgood ending.

But the undercard was where this show really shined. From the amazing Hart Foundation-Brain Busters opening tag, to the Rockers/Tito vs. Rougeaus/Martel six-man melee, to the fantastic Rick Rude-Ultimate Warrior Intercontinental Title rematch, SummerSlam ’89 delivered big where it counted. Sure there were some throwaways, but overall this is still a very fun watch.