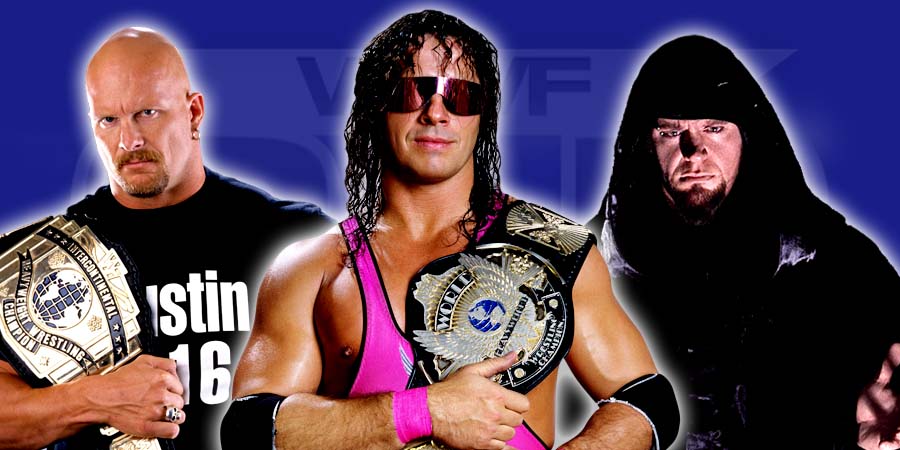 Welcome to another edition of Top Ten Things here at WWFOldSchool.com, where I compile a list of the best old-school wrestling items on my mind. Be sure to check out Enuffa.com for even more columns pertaining to wrestling, movies, music, and other pop culture stuff!

Today it’s a countdown of the top 10 Old School Wrestling PPV events of the 1990s! In the middle of the decade the PPV calendar exploded, as the WWF and WCW were jockeying for position as the top wrestling company in North America.

What had been a sparse schedule of 4-5 PPVs a year turned into a monthly rotation of special events. WCW expanded first, increasing their offerings to ten per year, which prompted the WWF to create two-hour PPVs to supplement their Big Five schedule. The B-shows were dubbed In Your House, and each had a sub-title to distinguish them. You all know the Monday Night War history – both companies raised the stakes on an almost weekly basis hoping to win the ratings battle, and by the end of 1997 each was offering a full 3-hour PPV every month. The wrestling landscape evolved quickly and abruptly during this time period, and the product on both sides became a pop culture phenomenon, breaking buyrate records like crazy. So which PPVs were the best of the decade? Given the deep pool of shows to choose from it was tough narrowing it down, but I think I’ve assembled a list of ten that holds up quite well. Here we go….

10. Royal Rumble ’93
The 1993 Rumble had no right to be as good a show as it was. Despite a very depleted roster the WWF managed an exceedingly fun Rumble PPV – from the fast-paced opening tag featuring WWF newcomers The Steiners vs. The Beverly Brothers, to the much-anticipated clash of former partners Shawn Michaels and Marty Jannetty, to the excellent Bret Hart-Razor Ramon WWF Title match, the undercard was easily the strongest of any Rumble show to date.

The Rumble match itself suffered from a paper-thin lineup and very few viable contenders, but amazingly it was still a well-worked match with several memorable moments. This was the year Yokozuna emerged from the pack to become the company’s monster heel Champion, enjoying the longest run of any heel WWF Champ since the late 70s. Even with very little star power the ’93 Rumble boasted two good-to-great Title matches, two solid undercard matches, and a decent if thin Rumble match – hardly a thing to sneeze at.