Let’s take a look at the top 5 wrestling stories of the hour: 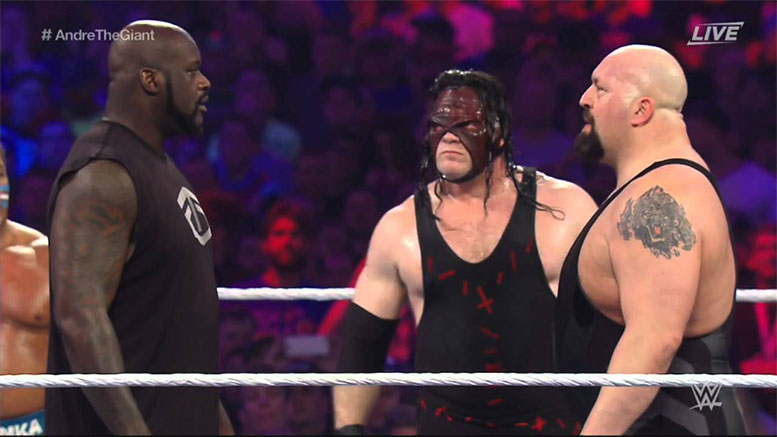 WarnerMedia has confirmed that Shaquille O’Neal has signed a contract extension with Turner Sports. In their press release, they hinted at an appearance from Shaq in AEW.

– Expanded Role to Include TNT’s Inside the NBA & NBA on TNT Tuesday Night Coverage, Along with Entertainment & Creative Projects Throughout WarnerMedia Portfolio

Can U Dig It? A Basketball Hall of Famer with larger-than-life personality, Shaquille O’Neal has reached a multi-year extension with Turner Sports that will expand the scope of his responsibilities throughout the WarnerMedia portfolio. In true Shaq fashion, following is a breakdown of some of the skills he’ll display as part of the new deal.

A 15-time NBA All-Star and four-time NBA Champion, O’Neal will continue in his role as studio analyst for TNT’s Sports Emmy Award winning Inside the NBA, along with the NBA on TNT Tuesday Night franchise.

He’ll also appear on NBA TV and contribute to NBA.com. His NBA TV airtime will include a new show in development on “The Business of Basketball,” with more details to be announced at a later date.

O’Neal will expand the ever-popular Shaqtin-a-Fool franchise to include new genres and platforms to reach an even broader set of passionate fans.

When he’s not in a mosh pit, he’s mixing tracks and audiences will be able to see him as part of the CNN New Year’s Eve Live show in the years to come. Past DJ Diesel appearances have included him bumpin’ everything from large festivals like Tomorrowland to more intimate venues around the globe.

O’Neal will serve as an executive producer for a number of projects with Turner Sports’ Bleacher Report. O’Neal and B/R will create new content that will combine his voice and the brand’s ability to fuse experiences hitting the intersection of sports and culture. O’Neal has also reached a development deal with WarnerMedia entertainment networks as part of the new portfolio-wide agreement.

O’Neal’s popular podcast will be distributed through the WarnerMedia Podcast Network beginning early next year.

Could Shaq return to the ring, making a cameo at a future All Elite Wrestling (AEW) event on TNT? We shall see….

“Turner Sports is family to me – even you, Chuck – and I’m looking forward to working alongside my talented colleagues as we create many more Shaq-tastic moments in the years to come,” said O’Neal.

“Shaq is so critical to our success, and such a huge part of the heart and soul of our coverage,” said Jeff Zucker, Chairman, WarnerMedia News and Sports. “We are lucky to be able to have him as part of our family every single day, and I am personally so thrilled to see that continue for a long time to come.”

“Shaquille’s tenacity as a player and loyal teammate made him one of the best to ever do it on the court, and those skills have translated to his contributions as a broadcaster,” said Tara August, Senior Vice President of Talent Services & Special Projects, Turner Sports. “His fun, infectious personality is engaging, entertaining and beloved by fans. We’re thrilled to extend and deepen our relationship with him for many years to come.”

Shaq’s last appearance in a wrestling ring was at WWE WrestleMania 32 in the Andre The Giant Memorial Battle Royal.