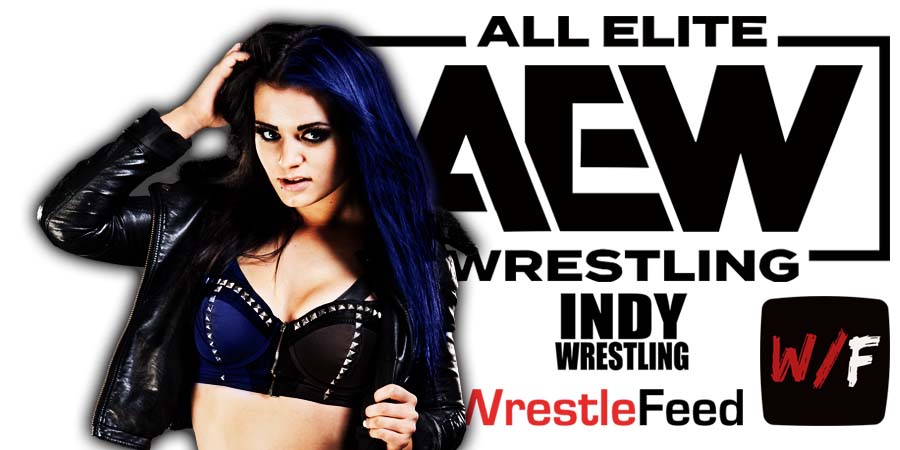 After a kick to the back by fellow WWE Superstar Sasha Banks at a 2017 MSG show, former Divas Champion Paige had to retire from active professional wrestling, but continued to work in non-wrestling roles on TV and behind the scenes until she parted ways with WWE earlier this month.

Ever since she left WWE, rumors started that she might end up in Tony Khan’s All Elite Wrestling under her real name Saraya-Jade Bevis.

During a recent interview with SK Wrestling, current AEW wrestler Britt Baker spoke about the possibility of Paige joining the company.

Here’s what the former AEW Women’s World Champion had to say:

“I’m a huge fan of Paige. I love her. I love her mom. I’ve wrestled her mom before actually. But she’s such an inspirational female. That girl has gone through it all and she’s still, pardon my swearing, but she’s such a bad b*tch and she has that everything roll off your back energy.

You can’t get to her. You know what I’m saying? She holds her head high and her in a wrestling ring again, if I’m not in the match, I want to be ringside watching it.

Because she was one of my favorites to watch. Her energy. I mean she would come out and do the sideways skip up the ramp. It made me so excited. I used to play her entrance music in my car. So, I’m a big fan.”

Baker then added that she thinks of a potential against Paige as a ‘Dream Match’, to which Paige reacted on Twitter by tweeting the following:

“Sign me up. I love me some Britt Baker.”

Also Read: Hall Of Famer Thinks Paige Will Return To WWE Within A Year

This episode was pre-taped at the Wachovia Center in Philadelphia, Pennsylvania and featured matches, interviews & storyline segments on the road to the ‘WWE SummerSlam 2008’ PPV.