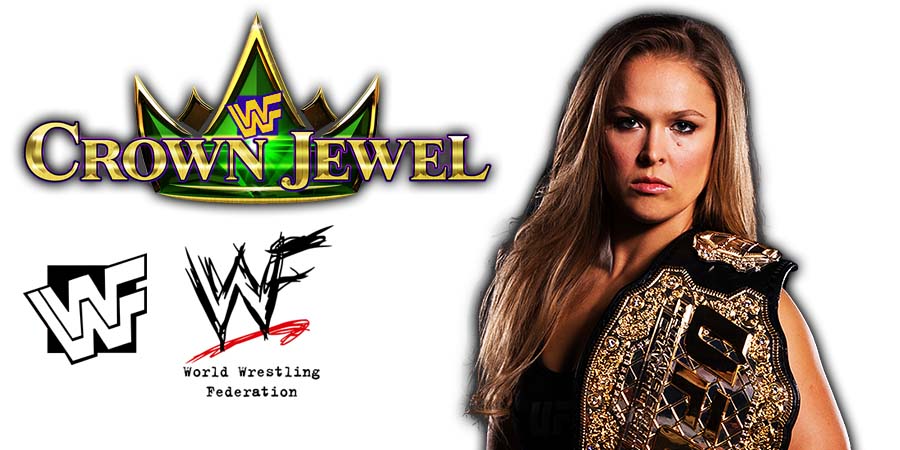 TMZ Sports caught up with RAW Women’s Champion Ronda Rousey and asked her about WWE sticking with their decision of doing WWE Crown Jewel PPV in Saudi Arabia.

Below is what Ronda said:

“I’m a two-time Olympian, so I’m an idealist when it comes to sport,” Rousey said. “One of my favorite memories from the 2004 Olympics was I was in the gym, cutting weight, and I was running.

Right next to me was a boxer from Iraq, he was running next to me, and it was the beginning of the Iraq war. No where else in the world would a man from Iraq and a little girl from Venice Beach be respecting each other and sharing space. I think sports are where we find that common ground in each other.

I think pulling out of Crown Jewel would be the wrong move because this is an opportunity to share our cultures and find what we have in common. Especially in times of adversity between two countries that’s the absolute wrong time to be able to pull away. That’s the time to find out what we have in common and be able to understand each other more.

It seems almost frivolous—these WWE events and these big world issues, but in a world where we’re always looking at it like ‘us’ and ‘them,’ I think those big events like Crown Jewel that bring everyone together just makes us realize it’s ‘us’ all around.

It’s just a great way for us to be able to share something and understand each other. I think that should be the goal. An ‘eye for and eye’ leaves the whole world blind.”