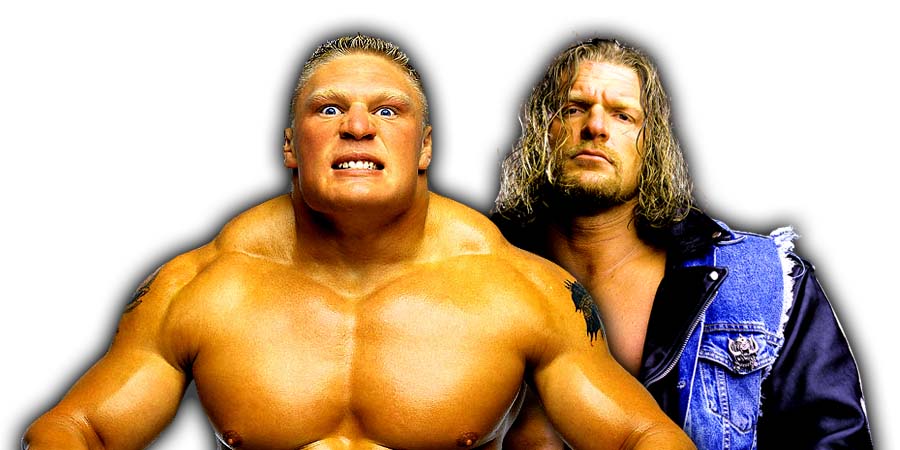 When Vince McMahon announced his retirement on Friday, July 22nd, there were rumors that Brock Lesnar walked out of SmackDown because he was unhappy about Vince leaving.

However, he showed up on SmackDown as advertised.

During an interview with Ariel Helwani, Triple H confirmed that The Beast did walk out when he heard the news of McMahon’s retirement.

He doesn’t like people [laughs]. But he’s not a trusting person and I think in that moment, where you just hear Vince is out, [he thinks] ‘Well now what’s going to happen? I’m out of here.’ You know what I mean?

I have a great relationship with Brock. Have we had issues over the years because at a certain point, he was a talent [and] I was a talent? Talent all get along to some degree, but there’s also a very real rivalry between all of them. They all want to be the best, everybody wants to be the best and be in that spot.

It’s just a different time now and I think now that he has had a moment to digest it. He digested it a little bit, came back to the building, we did business that night and had long conversations about where we would go next.

He liked what he heard and how he’s been dealt with, so it’s all good.”

Also Read: “P*rn is an insurance policy if WWE ever wants to fire me” – Matt Riddle

On this day in 1995, the World Wrestling Federation aired an episode of their weekly TV show ‘WWF Mania’.

This episode was pre-taped at the Worcester Memorial Auditorium in Worcester, Massachusetts and featured matches & storyline segments on the road to the ‘WWF In Your House 3: Triple Header’ PPV.