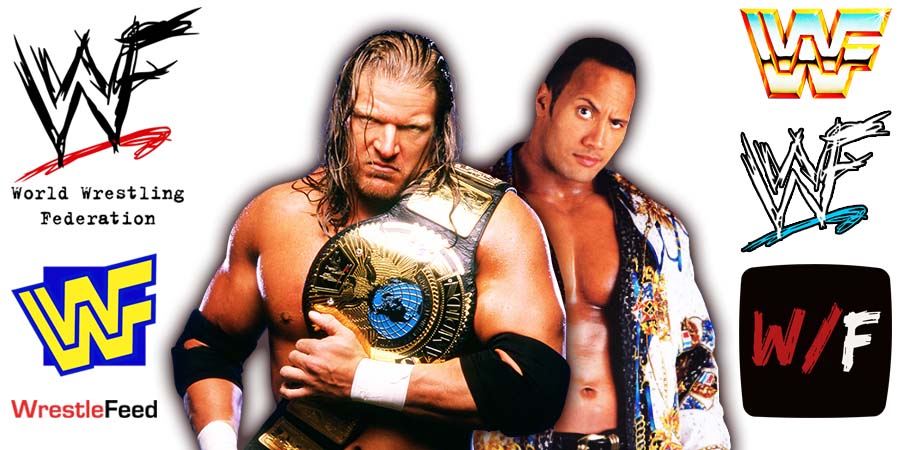 The Rock vs. Triple H was one of the biggest rivalries of the WWF Attitude Era.

During an appearance on Logan Paul’s Impaulsive podcast, Triple H revealed his only regret from this feud:

“My only regret with the whole thing with The Rock is, in 2000 we were poised to have a match at WrestleMania one-on-one. And I think that would have been an epic thing for both of us in that moment, the timing of Taker’s return and Austin’s return. And Austin wasn’t quite ready yet.

So they pushed the WrestleMania match and that year we did this Fatal 4-Way with Mick Foley, who I had just retired, coming back like a month later… and Big Show.

And a couple of months later we would have the one-on-one Iron Man Match (at Judgement Day 2000) that we wanted to have at WrestleMania.

Unfortunately, I always feel it’s the one thing… like we got to this unbelievably heated long-term rivalry and then never got to pay it off at the biggest platform possible. And I think Rock feels that way too.”

Many years later, Triple H vs. The Rock was planned to take place at WrestleMania 32 in 2016 (which is the reason why HHH defeated Sting at WrestleMania 31 – to keep him strong for The Great One next year), but it didn’t happen due to Dwayne Johnson’s busy Hollywood schedule.

Also Read: WWE Hall Of Famer Wants To Hit The Rock With His Finisher