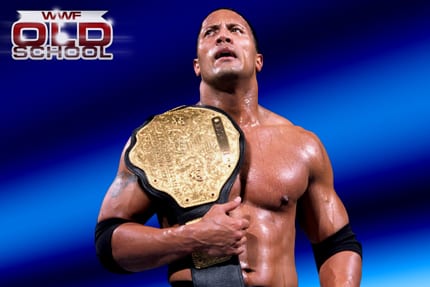 The Rock as WCW Champion

Triple H & Stephanie McMahon came out to announce at WrestleMania 31 that they have set a new attendance record here at Levi’s Stadium of 76,927. Triple H said they own every WWE Superstar and all the people watching.

The Rock talks about creating a WrestleMania moment right here right now. He talked about kicking Triple H’s a** right here! Triple H says he remembers their rivalry and remembers kicking Rock’s a**. Stephanie says without the McMahons there would be no Rock. “Shane O’Mac” chants from the crowd.

Stephanie slaps The Rock. Stephanie orders Rock to get the hell out of here. Rock looks at Ronda Rousey and the crowd cheers! Ronda Rousey climbs the barricade and Stephanie is in trouble! “Ronda’s gonna kill you” chants from the crowd!

Stephanie tells Ronda to get the hell out as well. Ronda says any ring she steps into is hers. Triple H interrupts and Rock beats the hell out of Triple H and Ronda slams HHH!!! Ronda Rousey applies an arm bar on Stephanie and throws her out of the ring. The Rock says he and Ronda laid the SmackDown on their candy ass!

Does this build to a possible Rock-Triple H match at WrestleMania 32 ??