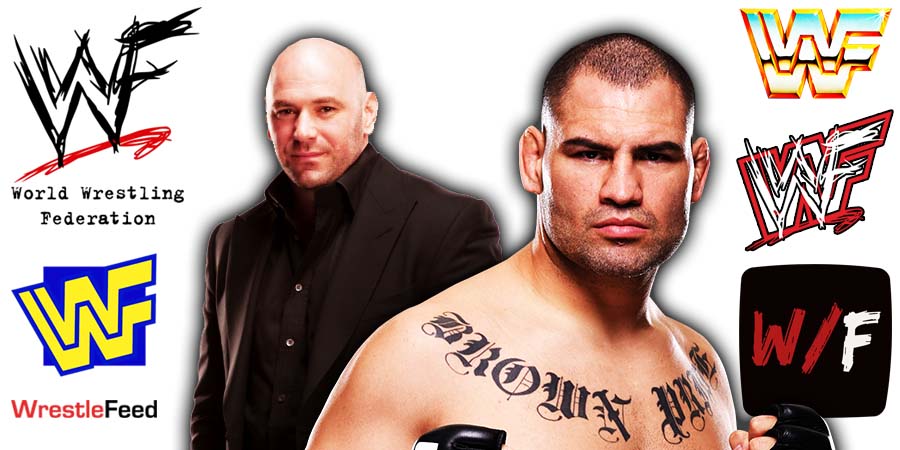 Former WWE wrestler & former UFC Heavyweight Champion Cain Velasquez could end up in prison for over 20 years after trying to shoot a man (missed him and shot his father instead, who is expected to recover) who abused one of his children (age 4) at day care multiple times.

During an interview with Barstool Sports, UFC President Dana White had the following to say about the Cain Velasquez situation:

“I obviously feel sorry for him and his family. It’s a horrible thing. I don’t know enough details to speak on it, but from what I’ve heard – we all say we’d do it if it ever happened to us. Cain did it.”

Several MMA fighters have shown support for Cain. You can read their posts below:

Khabib Nurmagomedov: You are the man, Cain. We love you and we always stay with you.

Ryan Bader: When first hearing the news I thought there has got to be something else to the story. ALLEGEDLY the relative is his 4 yr old son. I’ve known Cain for a long time and despite his intimidating exterior he is one of the nicest, caring dudes on the planet and a straight up family man. Could he have handled things differently? Sure. Although most of us haven’t been in this position and who knows how you would react.

Ben Askren: I don’t want to live in a country where you can’t shoot someone who sexually abused your child. #FreeCain

Brendan Schaub: I would like to hope if some scumbag molested an innocent 4yr old child the legal system would take into account the rage a father would have. California is pretty loose with actual violent criminals these days. Cain is far from that. #FreeCain

Marvin Vettori: Cain got my support 💯

Olivier Aubin: I’m not condoning this type of behavior but I understand.

Kyle Crutchmer: Read this. I don’t wanna hear anything else about CTE Or really any other sh*t. This dude protected his family. They released a scumbag. I’ve always been taught to protect my family and that’s at any cost! FREE CAIN💯

Deron Winn: I stand by Cain and his family in these hard times. He is one of the most selfless, genuine people I’ve ever had the pleasure to know on a personal level. I almost can’t put into words how of amazing of a guy he is. He lives a good life. The truth will come to light.

Lavar Big Johnson: They need to give this man an award!!!! Protect your family by any means necessary! #freecain

Sean Strickland: If this is true @cainmma is a f**king hero bottom f**king line. There is nothing I respect more than when a man does this. 911 isn’t the answer for this. I’ll be the first one donating to a gofund me for his defense. Pedophiles need to die.. they can only be fixed with fire….

Angela Hill: I feel horrible for Cain and his family. This is the worst way revenge could’ve played out. Hoping they go easy on him.

Arjan Singh Bhullar: Harry Goularte 🎯 The 🌍 has no place for trash like this. He walks the streets while our guy @cainmma is locked up. Cain did what a father and man is supposed to. Respect. Unfortunately he missed. The fact that this guy was released with an ankle monitor is disgusting. #FreeCain

Michael Chiesa: If you aren’t going to free Cain, at least arrest this guy and lock him up in the same jail cell as him. #FreeCain

If you aren’t going to free Cain, at least arrest this guy and lock him up in the same jail cell as him. #FreeCain https://t.co/Dj3bvYX15R