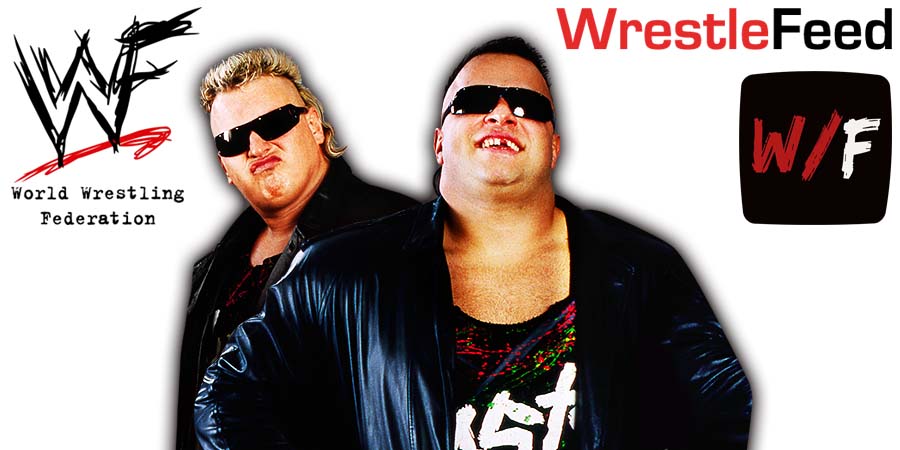 Former WWF Tag Team Champion Brian Knobbs (of The Nasty Boys) was recently hospitalized due to major stomach issues and his good knee giving out.

“With heartfelt appreciation, Brian would like to sincerely thank all his family, friends and fans for their amazing words of encouragement and support. Your outreach has genuinely helped him keep a positive mindset in this difficult time.

Offering a medical update on Brian, after being rushed to the E.R. complaining of severe stomach pain, compounded with a secondary medical problem of his good knee giving him excruciating pain, the specialists who examined Brian ordered many lab tests and x-rays to help assess the severity of his condition.

It was determined that a probing of his upper stomach was essential, however the procedure required Brian to undergo a general anesthesia. A complication caused by low sodium levels in Brian’s system forced physicians to stall the general anesthesia because it presented an unacceptably high degree of risk.

To mitigate the problem, Brian was put on a pure liquid diet designed to purge his system. He was then administered a regiment of liquid supplements to increase his sodium levels.

True to his character, during these setbacks Brian managed to keep an optimistic attitude, however he does admit to feeling a tinge of fear when he was asked to sign a waiver holding the hospital harmless if he fails to come out of the sedation. Of course, such a waiver is standard protocol for all hospitals, however signing that waiver is always an unsettling thing to do.

Giving this post a very encouraging ending, I’m pleased to report that the general anesthesia has now been completed, and Brian is awaiting the results of what the doctors learned. There is a long period of healing ahead of Brian, and we ask that you please keep him in your prayers.

Your love and support have deeply moved him and will no doubt help him regain the strength he needs to recover. Brian feels blessed to have his dear family, friends and fans supporting him in this biggest bout of his life!”

A GoFundMe page has been set up for Brian to cover with the medical expenses. The goal of this campaign is $20,000 and $13,419 have been raised as of this writing. Tap here to visit his GoFundMe page.