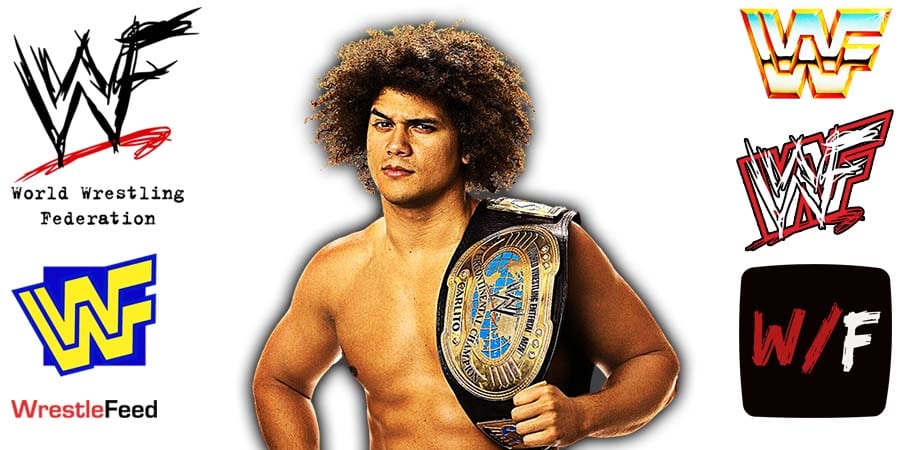 As seen this past Sunday at the Royal Rumble 2021 PPV, former Intercontinental Champion Carlito returned for a WWE match after 10 years when he competed in the Men’s Royal Rumble match.

After that, he appeared on RAW to team up with Jeff Hardy and defeat Elias & Jaxson Ryker in a tag team match.

According to PWInsider, Carlito was originally scheduled to be backstage at RAW to get a tryout for the position of a WWE Producer.

However, Wrestlinginc reports that MVP asked WWE officials to give Carlito a trial run as an in-ring competitor and that’s why he wrestled on RAW.

Carlito is currently on a 3 week trial run which will decide his future as a wrestler in WWE.

It should be noted that when MVP returned during last year’s Royal Rumble match, he went on to wrestle the next night and said it was his final match, as he returned to be a backstage producer.

However, MVP made enough impact to become a regular figure on weekly WWE programming and ended up creating Hurt Business.

The same thing could happen to Carlito if he gets enough fan support.

Carlito said the following after his appearance on this week’s RAW:

“If this is goodbye, it was great to be back home after all these years. Saw some old friends, met some new ones. Truly humbled by all the responses and reactions from everybody. A todos mis Boris, I hope I made you proud.”

1. The Junkyard Dog vs. Johnny Rodz