Eddie Guerrero defeated Brock Lesnar for the WWE Championship in the main event of the ‘WWE No Way Out 2004’ PPV, but passed in November 2005 from acute heart failure due to underlying atherosclerotic cardiovascular disease.

• Vince McMahon Wants Cain Velasquez To Do Something About His Physique

Paul Heyman posted photos of new WWE Champion Brock Lesnar and Cain Velasquez from SmackDown on his Instagram page and AEW World Champion Chris Jericho commented the following under it: 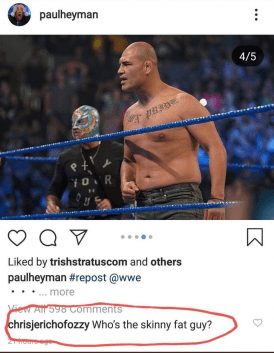 According to Brad Shepard, Vince McMahon isn’t impressed with Cain’s physique and wants him to do something about it:

“According to a source in WWE, Vince McMahon wants Cain Velasquez to get ripped, if he’s going to commit. The feeling is that he doesn’t look like a former UFC Heavyweight Champion right now (where as for example, Brock Lesnar does).

I’m told Velasquez is really nice and willing to learn.”