During a recent edition of Vince Russo’s “The Brand” podcast, Russo talked about the Hell In A Cell 2017 main event between Shane McMahon & Kevin Owens. Russo was critical of Shane O’Mac taking insane bumps at the age of 47 and said the following:

Shane is in his late 40s and I don’t care if Shane thinks he’s 15 in his brain. He’s not, bro. He’s a 40 plus year old man. He’s got a beautiful family he’s got his whole life ahead of him, bro. Hey, I hate this. I’ll be honest with you. It makes me sick to my stomach.

Shane McMahon jumps off the Hell in a Cell again! pic.twitter.com/PvtfGfygdV

Don’t get me wrong. The WWE is doing everything for it to be safe. I’m not saying that. I’m sure they rehearsed this thing. Everybody was safe. But bro, fighting on top of that cage for so freaking long and then the bumps, you know, and thank God bro both bumps look clean nobody got hurt but the bumps off the top…. this is a freakin’ work. Like this is a freakin’ work.

This is not entertainment to me. I’m not enjoying this. I’m just hoping and praying somebody doesn’t get freaking hurt. I know it’s a work, bro. I was in the business for 25 years but I also know that they are increasing the risk in these matches.” 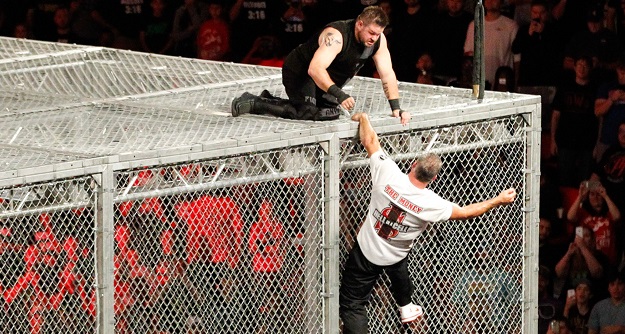 Below is what former ECW, WCW, WWE & TNA Superstar “Big” Vito LoGrosso said about the match during the podcast:

“Did he (Shane) get tired out there? I saw it in his face. He took his time. He paced himself. He could still do the garbage can across the ring. When he went up there and took the bumps on the cage, hey it was carefully done. It was precaution. It was safe. Now, Kevin Owens is trying to get over as monster here, trying to be hanged there.

There’s not gonna be another Shane McMahon. There’s not going to be anybody to raise the fall. How many more Hell in a Cell does Shane McMahon have? I’m telling you I think it’s only gonna be maybe one or two before he realizes what you’re saying – “I’m a family man. I’ve got to really cut this out. I already survived the plane crash. I can only survive so many Hell in a Cell crashes before it takes a toll on your body”.

Like you said, you never know you slip your fall, you get an edge, you catch the edge of a table, the edge of the stairs, you cut your face open….something can happen.

As far as the finish of the match, I thought it was a great finish not to beat both men and to have a run in by Sami Zayn because it definitely took the crowd by surprise. You know… Kevin Owens has been effective in a pair like when he was with Jericho. I think as a single it kind of fizzled out.

They had to bring Shane McMahon to elevate him and I think that Kevin Owens in a pair with Sami Zayn will do great business for the SmackDown brand. Because let’s face it. So many guys can only carry the ball. I’m not saying that Kevin Owens didn’t carry the ball, but he’s better equipped to work with a partner. Not being a tag team, but to have a sidekick.

As far as Shane McMahon goes like you said Vince, you know him personally – I know him personally, he has a love for the business. His father does push him and expect him to do two great things to represent the McMahon family. He puts him in these different positions and he’s obligated and he has to fulfill it. And at the end of the day everybody wants to be safe.

But as well as you know there’s a lot of pride in the McMahon family and when it comes to doing these things on the pay-per-view, they like to stand out. They want to prove they’re the best and superior to everybody. It doesn’t matter if you’re right in the show, you’re empty and trash.

If your last name is McMahon, you’re gonna be the star to show. And that’s what happened tonight Shane McMahon represented the McMahon family. He did an excellent job. Nobody was a loser guys. I repeat it nobody was a loser. Both guys won.”