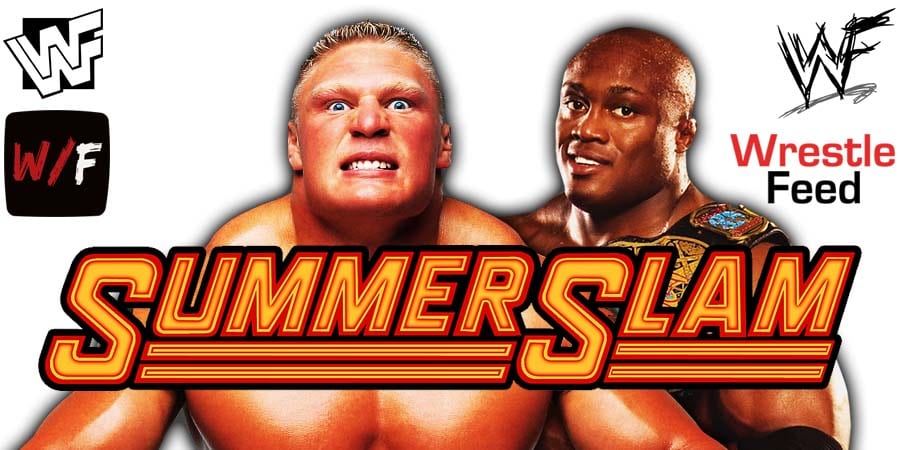 We recently reported that a rumored Brock Lesnar vs. WWE Champion Bobby Lashley match is most likely not going to happen at the upcoming SummerSlam 2021 PPV in August.

In an update on this situation, Andrew Zarian said the following on an episode of the Mat Men Pro Wrestling podcast:

“They wanted Brock. For whatever reason, the plan didn’t work out. I believe it was creative-wise, it just wasn’t fitting. Financially, they want Brock to commit to live shows. They are working it out, it’s gonna happen. It’s not that it’s not gonna happen, it’s gonna happen unless something goes tremendously terrible, which I don’t think it will.

I think we’re gonna see Brock, I just don’t think he’s needed for SummerSlam if they have this planned out already. If Brock calls them and says ‘hey I wanna do it’ then yeah, they’re gonna figure it out. I don’t believe Brock’s gonna be on there…I don’t know about Brock right now. I know that he’s in the plans. They’re gonna do something with him, I just don’t know what yet.”

At this point, it’s all rumors & speculations and it wouldn’t be the first time that WWE actually ‘worked’ the fans, so there’s still a chance that Brock will actually return for the biggest part of the summer.

Also Read: How Long Will John Cena Stay In WWE When He Returns?

Tom Brandi is probably best remembered for his time in the World Wrestling Federation (1996-1998) as Salvatore Sincere and later also under his real name.

Some early 90s WCW Fans will also remember him as Johnny Gunn, who often teamed up with “The Z-Man” Tom Zenk.

He’s still active on the independent scene every now and then and rumor has it, that he’s using the gimmick of “The Patriot” (including the same gear) but allegedly without Del Wilkes’ (The Patriot in WCW & the WWF) permission.