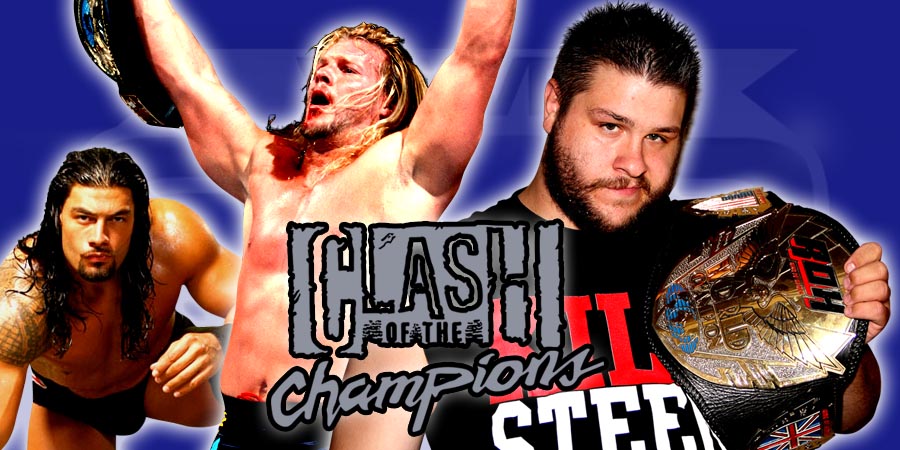 Tonight’s Clash of Champions 2016 PPV is the 1st ever Raw exclusive PPV of WWE’s New Era. The PPV is taking place at the Bankers Life Fieldhouse in Indianapolis, Indiana.

Tonight will mark Kevin Owens’ 1st ever appearance in a WWE PPV main event, when he defends the WWE Universal Championship against Seth Rollins in the main event of Clash of Champions 2016.

Below is what Owens tweeted before the PPV:

The 1st match of the night is the Kickoff match between Nia Jax & Alicia Fox. Nia finishes things with a big Samoan Drop for the win.

The main show kicks off with the WWE Tag Team Championship match between The New Day (Big E & Kofi Kingston) and Luke Gallows & Karl Anderson. During the ending moments of this match, Xavier Woods hits Anderson with Francesca while the referee is distracted and Big E & Kofi hit the Midnight Hour for the win.

Kendrick shakes TJP’s hand after the match, but ends up headbutting him. Looks like Kendrick will work as a heel from now on.

Next match is the final match of the “Best of 7” Series between Cesaro & Sheamus, who are currently tied at 3-3. The winner of match #7 will win the series and receive a Championship shot (possibly a United States Championship shot).

In the middle of the match, Cesaro goes for the Suicide Dive through the ropes and landed badly on his neck. Sheamus delivers a Brogue Kick after this but Cesaro still kicks out. Cesaro goes on to hits the Neutralizer but Sheamus kicks out! The crowd is chanting “This is Awesome!”.

Sheamus jumps from the top rope to outside the ring but Cesaro hits a big uppercut and lays out Sheamus. Sheamus delivers a Whitenoise outside the ring. Both men get up and Cesaro pushes Sheamus into the ring post and then Cesaro clotheslines him into the other side of the barricade and both are down.

The referees call for the bell as they are worried about Cesaro after the nasty bump he took. Sheamus is taken to the back while Cesaro is in the ring and he wants to go at it.

On advice of the @WWE trainers and doctors, the referee STOPS the match! #BestOf7 #WWEClash pic.twitter.com/Wf5FZs4NM0

Go to the next page for more updates from Clash of Champions 2016.