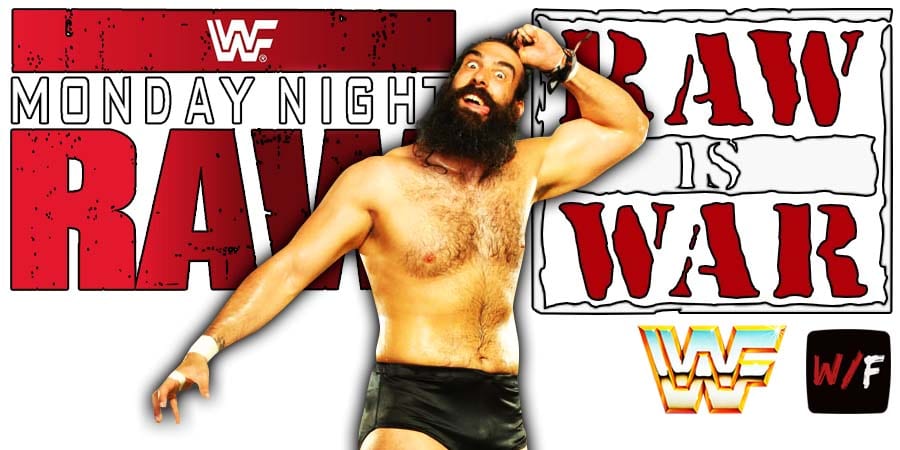 Tonight’s RAW kicked off with an “In Memory Of” graphic for Jon Huber (Luke Harper / Brodie Lee), who passed away two days ago.

After that, RAW commentator Tom Phillips said “It’s Monday, you know what that means”. WWE Champion Drew McIntyre also said the same in his promo in the opening segment. For those who don’t know, it’s a line that Jon used to use everyday on Twitter.

WWE got heat for only doing this, as fans were expected a 10-bell salute with wrestlers standing on the stage.

You can read some comments from fans on Social Media below:

“Unacceptable could of done a video Package or something more.”

“No moment of silence? No bells? Smh… lost alot of respect at that.”

“Be happy they acknowledge him at all despite being in a different company. Others like Umaga and Viscera did not.”

“Absolute embarrassment of a tribute. Not even a single mention at the start of Raw from any of the commentators at least. Joke.”

“I really hope it’s more than just a picture.”

“No 10 bell salute? Just a screen? The disrespect. Jon deserves something more respectable than a little 10 second screen.”

“This man deserves more than that, AEW definitely has more class than WWE, smh.”

“This was nice but was completely expecting a 10 bell salute as well. I typically back most of what WWE does but this disappointed me. @TripleH @VinceMcMahon @StephMcMahon you all could’ve done better.”

“Such bulls**t that they couldn’t give him more respect.”

“Sad they couldn’t ring the bell 10 times turned it off.”

It should be noted that WWE could still air a video tribute for Jon later in the night.