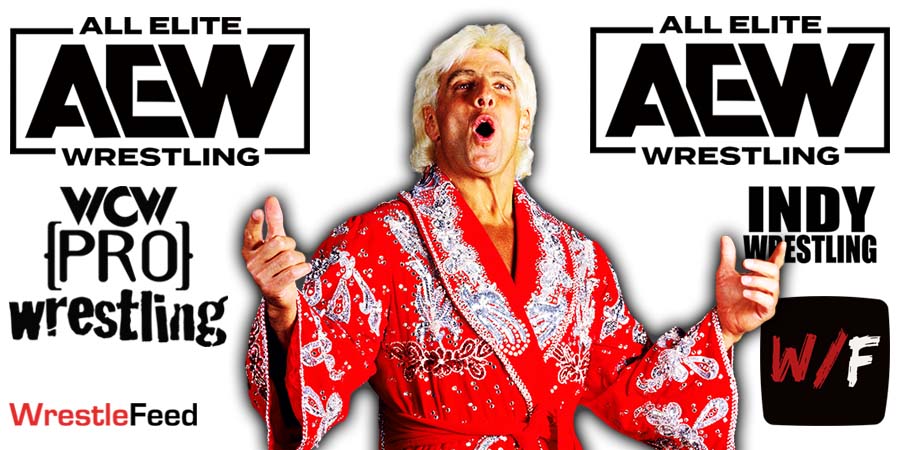 According to the Wrestling Observer, 2-time WWE Hall Of Famer Ric Flair will sign with AEW when he legally can.

Flair recently requested his release from WWE and they granted him his release. If he has a 90-day non-compete clause, then that will end on November 1st.

According to Booker T, The Nature Boy might be planning to wrestle again. Here’s what he said on his Hall Of Fame podcast:

“Ric Flair is not the managerial type of guy. It’s just not his role. As well as, Ric Flair is not one of your guys that wants to be in the office, coming to work every day, wearing a suit and going into the office. That’s not Ric Flair.

Ric Flair’s a party guy. That’s just his nature. You saw him on Triller, he’s all about having some fun.

Now my thing is this, I talk to Ric Flair on a regular — usually on a regular occasion, I don’t know how often I’m going to see him now, but Ric Flair told me, he said, ‘Book, I’m never going to retire.’ He said, ‘If I could be in that ring right now, that’s where I’d be.’

So I think Ric Flair may be looking at one last run.”

Damn Right! 💪🏻 Do You Think An Airplane Crash, Being Struck By Lightning, And Almost Dying Four Years Ago Can Stop The Nature Boy? Hell No! WOOOOO! @HardNocksSouth pic.twitter.com/dhFspsZrrU

It should be noted that Flair wrote the following in his statement that he released after his WWE departure:

“We have a different vision for my future.”

What does the future hold for the 16-time World Heavyweight Champion? We’ll keep you updated regarding Ric Flair’s status here on WWFOldSchool.com and on our WrestleFeed App.

Brunzell started in the AWA where he formed a tag team called ‘The High Flyers’ with the promoter’s son Greg Gagne.

Between 1985 and 1988, he teamed with B. Brian Blair as ‘The Killer Bees’ on WWF TV, before being used as a singles wrestler from 1988 till he left the World Wrestling Federation in 1993.

The Killer Bees are still considered one of the most underrated Tag Teams of all time.