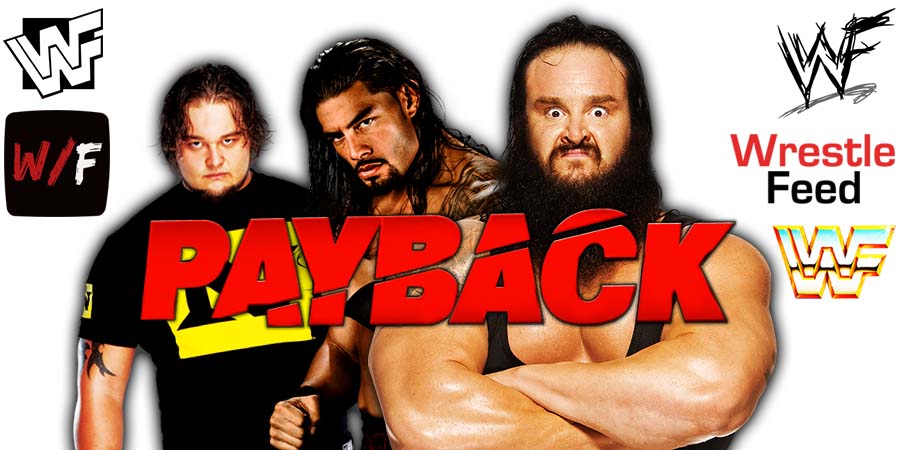 Up next is the rematch between Randy Orton and Keith Lee.

This is Lee’s first singles match on a WWE PPV and he defeats Orton absolutely clean in a short match!

Lee hit Orton with the Spirit Bomb to get the pin.

Up next is a tag team match. Seth Rollins & Murphy make their way out first, followed by Dominik & Rey Mysterio.

During the ending moments of the match, Murphy accidentally kicked Rollins in the face.

This led to Rey & Dominik taking advantage, and Dominik hit Murphy with the 619 and Frog Splash to win the match for his team!

This is Dominik’s 1st ever WWE PPV win!

Up next is the main event of the evening and it is a Triple Threat No Holds Barred match for the Universal Championship.

Universal Champion “The Fiend” Bray Wyatt makes his way out first. He enters the ring and gets attacked by Braun Strowman!

Roman Reigns isn’t here and the match has already begun.

Fiend hasn’t even taken his jacket off and he’s fighting Strowman. Fiend hits the Sister Abigail and goes for the cover, but Strowman kicks out.

Fiend hits a Urinage on Strowman through the announce table! Alexa Bliss is shown watching the match from the backstage area.

Strowman comes back into the fight and launches a steel chair onto The Fiend. Strowman drops Fiend on top of the steel steps with a blow to the chest.

Strowman picks up Fiend’s mallet, but Fiend fires back. Fiend picks up his mallet and hits Strowman in the chest to take him down!

Fiend twists Strowman’s neck after this. He now picks up the steel steps and hits Strowman with it to take him down again.

Fiend is looking to hit the Sister Abigail on the stage, but Strowman counters and crossbodies Fiend off the stage through a table!

Strowman takes Fiend back to the ring as this isn’t a Falls Count Anywhere match. Strowman is going to the top rope, but The Fiend stops him.

Reigns is here with a Steel Chair, but drops it outside the ring. Reigns is looking for a referee and tries to pin The Fiend twice, but Fiend kicks out. Reigns now tries to pin Strowman, but Strowman kicks out.

Reigns is now attacking Strowman with a Steel Chair and goes for the cover again, but Strowman kicks out.

Reigns goes to hit Fiend with a Steel Chair, but Fiend locks-in the Mandible Claw! However, Reigns low-blows Fiend and escapes.

Reigns spears Strowman and pins him to win the Title!

Reigns is now a 2 time Universal Champion. Payback goes off the air with Reigns & Heyman posing on the stage.