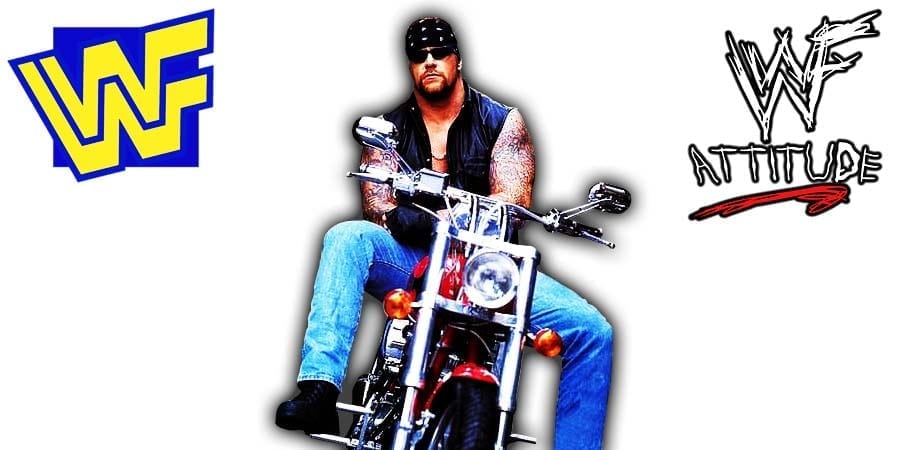 – The Bushwhackers vs. The Brooklyn Brawler & Dale Wolfe

• WWE Posts 20 Facts You May Not Know About The Undertaker

WWE recently posted a video titled “20 facts you may not know about The Undertaker”. You can read these facts below:

3. Undertaker won the main event of the 1st ever Monday Night RAW

4. Paul Heyman managed The Undertaker in WCW, when Taker was Mean Mark Callous

5. Undertaker & Shawn Michaels had their first ever PPV match against each other at Ground Zero back in September 1997

6. Before facing Shane McMahon in a Hell in a Cell match at WrestleMania 32, The Undertaker & Shane O’Mac joined forces in 1999 to run the Corporate Ministry

7. Undertaker has a record of 8-5 inside Hell in a Cell

8. Undertaker has played his character in 3 movies

9. Undertaker is a 7 time Tag Team Champion, with his partners being The Rock, Kane, Big Show, and Stone Cold Steve Austin

10. 1st & only superstar so far to win the Tuwaiq Mountain Trophy

14. Undertaker’s WrestleMania streak came to an end at 21-0

15. Undertaker was rushed to the hospital after his WrestleMania 30 match

16. Undertaker’s only repeat opponents at WrestleMania were Kane (2), Shawn Michaels (2), and Triple H (3)

17. Undertaker is the only superstar to have defeated all 4 members of Evolution (Triple H, Ric Flair, Randy Orton, and Batista) at WrestleMania

18. Undertaker was the 1st man to win the Royal Rumble match from #30

20. Undertaker conducted his first-ever long form interview with WWE in 2019 for Steve Austin’s Broken Skull Sessions on the WWE Network