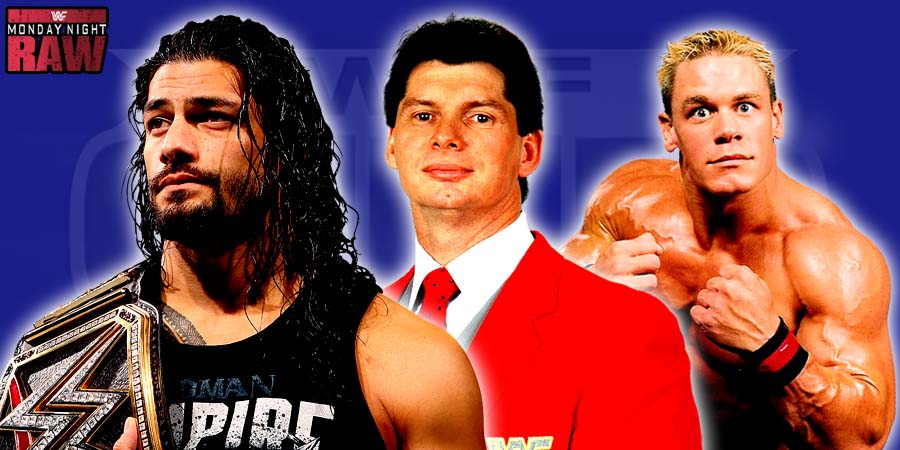 Tonight’s edition of WWE Raw is airing live from Brooklyn and is the final Raw of 2015.

Mr.McMahon open tonight’s Raw and gets straight to business, and calls out the WWE World Heavyweight Champion Roman Reigns. Reigns comes out through the crowd, posing with his Title.

McMahon talks about Reigns beating down Triple H. McMahon messes up his lines and says you incapacitated my “brother-in-law”.

The @WWE World Hvt. Champion @WWERomanReigns heads to the ring to meet with @VinceMcMahon. #RAW pic.twitter.com/ZmVz104Ph2

McMahon: You think I should congratulate you? … I just can't find it in my heart! #RAW pic.twitter.com/HecV10xuB1

Crowd starts chanting for Daniel Bryan & CM Punk, and Vince tells them to shut up.

"I OWN this ring. I OWN that title. … I OWN YOU!" – @VinceMcMahon to @WWERomanReigns #RAW pic.twitter.com/IE3LHOWrbI

REIGNS: You don't OWN [this title] … Me and my supporters OWN this title! #RAW pic.twitter.com/v7Md74Hait

McMAHON: I used up your Dad [Sika]. and lined my pockets with the money! #RAW pic.twitter.com/5ZzQMUCzxt

.@WWERomanReigns has the best view as @VinceMcMahon is taken away by New York's finest! #RAW pic.twitter.com/yGgZniKKxh

Neville def. Kevin Owens: Owens gets pinned by Neville in 20 seconds and Owens has lost it. Owens lays out Neville after the match.

Owens hits a vicious clothesline outside the ring and continues the attack, but Dean Ambrose makes the save and Owens retreats.

.@ReneeYoungWWE brings us the absolute LATEST on @VinceMcMahon outside the NYPD precinct in Brooklyn… #RAW https://t.co/hturWJnwm6