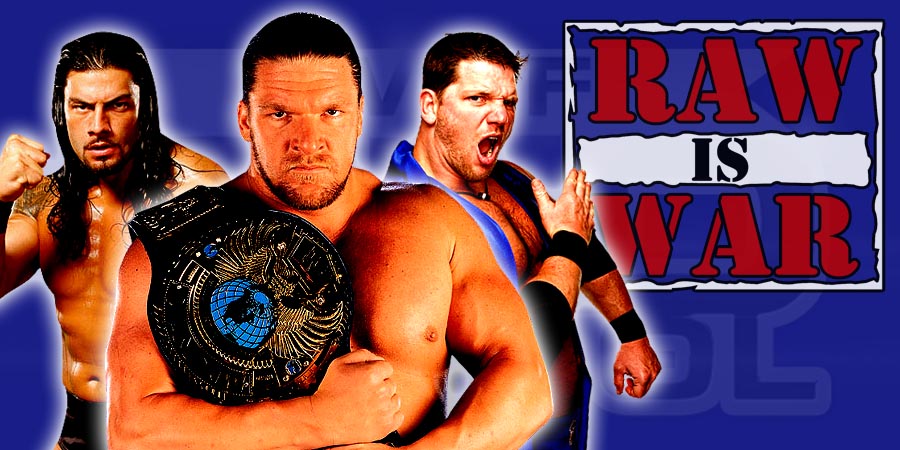 Tonight’s episode of WWE Raw will feature the aftermath of Royal Rumble 2016 and WWE teased a big star will return tonight.

Mr. McMahon & Stephanie McMahon come out and make fun of Roman Reigns and talk about how he failed last night.

Stephanie talk about how the fans thought Reigns was going to win, or Lesnar, or even AJ Styles!

"ROMAN REIGNS IS BROKEN! WE BROKE HIM in HALF!" – @VinceMcMahon #RAW pic.twitter.com/ntlK1FAJ0i

Stephanie now puts over Triple H as “The Man” and greatest WWE Superstar of all time!

Out comes “The Game” Triple H in his business suit and he opens his jacket to reveal the WWE World Heavyweight Championship around his waist.

Triple H says he doesn’t need to be WWE World Champion but he wants to be so, because guys like Roman Reigns want to WWE World Heavyweight Champion.

Roman Reigns has arrived in the arena.

"Let the Chairman and Champ know I'm here … I'm not leaving until I hear their announcement." – Roman Reigns #RAW pic.twitter.com/5gURf4DrRC

“My House” by Flo Rida is the official theme for WWE WrestleMania 32.

The Social Outcasts are out next. Heath Slater takes a shot at Flo Rida, who’s at ringside. Slater calls Flo Rida in the ring and challenges him to a rap contest.

Bo Dallas raps for Social Outcasts. Flo Rida is up next. Flo Rida finishes his rap by introducing The Dudley Boyz. It should be noted that Bo Dallas is sporting a new in-ring gear tonight.

– AJ Styles def. Chris Jericho in his Raw debut. They shook hands after the match and had a staredown.

– Sasha Banks vs. Becky Lynch ends in a No-Contest when Charlotte interferes.

The Wyatt Family attacks Kane after the match.

The Miz comes out of the limo. And here comes The Rock’s truck! The Rock disses off Big Show by remembering Royal Rumble 2000. The Rock meets Lana and jokes with her and out comes Rusev. This Rock is AWESOME!!!!

New Day interrupts The Rock. They make fun of how they beat Rock’s cousins last night at Royal Rumble.

"You are so nerdy … It's almost like The Incredible Hulk banged Urkel!" – @TheRock to @WWEBigE #RAW pic.twitter.com/HKhoJJfxFc

The Rock asks them if they’ll like it if The Rock shoves the Trombone up their a$$es. The Rock challenges them to a fight but New Day backs down. The Usos come out and they attack New Day. The Rock rock bottoms Big E! Usos double-superkick Xavier Woods and The Rock hits a Spinebuster followed by a People’s Elbow!

The Rock thanks Miami and says we’ll deal with this at WrestleMania. The segment ends as Rock’s music hits.