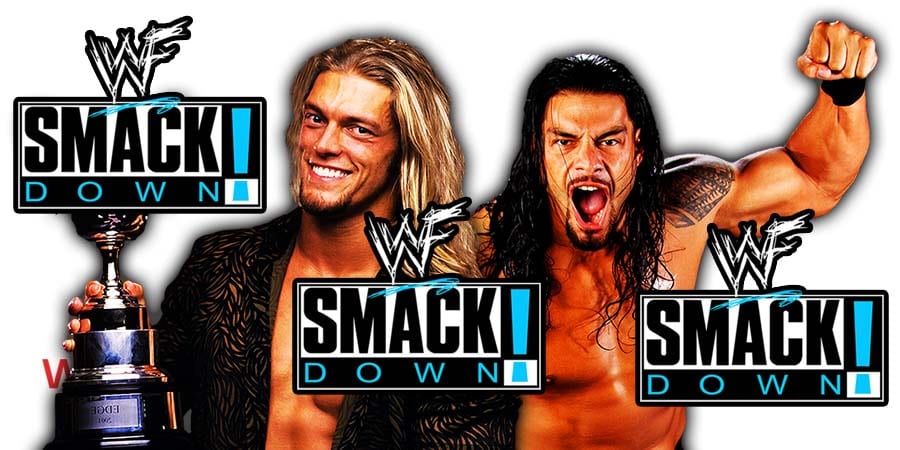 Below are the results from tonight’s go-home edition of SmackDown for this Sunday’s Elimination Chamber 2021 PPV:

– Men’s Royal Rumble 2021 winner Edge kicked off the SmackDown. Universal Champion Roman Reigns then interrupted Edge and said he can pick a main eventer to face at WrestleMania 37, or he can pick THE Main Event: Roman Reigns.

Edge then said Reigns is insecure and that The Tribal Chief knows whoever he chooses to face will be the main event of WrestleMania 37, and it could be WWE Champion Drew McIntyre, AJ Styles or Randy Orton (if they win the WWE Title in the Elimination Chamber).

Sami Zayn then interrupted and started talking trash. Jey Uso took him out with a Superkick.

Reigns then whispered something in Edge’s ear and left.

– Seth Rollins said his friends turned their backs on him last week. He said months went into planning his return last week and it was ruined by a bunch of losers and cowards.

Seth said the biggest loser of all is Cesaro. Rollins said that Cesaro embarrassed and patronized him and his followers and waited until he was last to disrespect him, and that Cesaro asked for the beating.

– Edge wished Kevin Owens good luck for the SmackDown Elimination Chamber match, and told Owens it would be good to face him at WrestleMania 37.

– Reginald, SmackDown Women’s Champion Sasha Banks & Bianca Belair def. WWE Women’s Tag Team Champions Nia Jax & Shayna Baszler and Bayley (Nia picked up Reginald, but Sasha & Bianca hit Reginald in the back with a dropkick and he fell on top of Nia and pinned her to pick up the win)

You can watch Reginald pin Nia below:

– In a backstage interview with Kayla Braxton, Cesaro said he wants to keep his momentum going and is focused on winning tonight and this Sunday at Elimination Chamber, as he plans on defeating Roman Reigns to become the new Universal Champion. Edge appeared and talked about ‘grit’ with Cesaro. Cesaro said he looks forward to facing Edge at WrestleMania 37 after he defeats Reigns this Sunday night.

– Edge met Daniel Bryan backstage. Bryan said if he wins the Elimination Chamber match and then goes on to beat Roman Reigns to win the Universal Championship, then they should face off at WrestleMania 37. Edge says some would call this a ‘Dream Match’ and Bryan said some would call it ‘long overdue’.

– Carmella was angry at Reginald for lying to her and didn’t like the champagne that he served her, so she threw it in his face

– Daniel Bryan, Cesaro & Kevin Owens def. Sami Zayn, King Corbin & Jey Uso (A brawl broke out after the match and it ended with Edge spearing Jey Uso. Roman Reigns then speared Edge out of nowhere to end the show)

Hardly anyone remembers nowadays, that he was even a ‘Paul Heyman guy’ for one night in Ted Turner’s WCW (1992), where Paul brought him in to wrestle Bill Watts’ son Erik Watts.