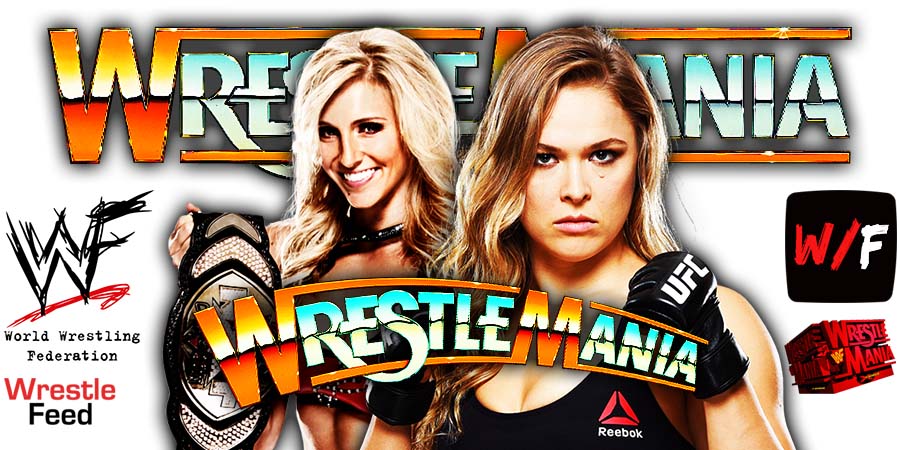 – Tonight’s SmackDown kicked off with The Bloodline coming out, with Universal Champion Roman Reigns wearing his new God Mode T-Shirt.

Reigns said tonight he will see Lesnar for the 1st time since he smashed him at MSG and made him bleed.

Roman said he’s gonna make Lesnar bleed again tonight, but Paul Heyman informed him that there was some issue with Lesnar’s private jet and he won’t be able to make it tonight.

The Tribal Chief then said The Beast is afraid of him and that’s the real reason why Brock isn’t coming tonight.

Roman said he’s in God Mode now, which is Greatness on a different level, and there’s no man that can touch him.

Heyman then received an update that Lesnar is on his way. As soon as Roman heard this news, he rushed to the back.

The Bloodline got in their car and were about to leave, but Lesnar attacked Roman’s car with a Forklift and turned it sideways and kept dragging it with the forklift.

Lesnar then came to the ring with the ripped off door and warned Roman that he’s coming for blood at WrestleMania in 2 weeks and there will be no where to run then.

– Sami Zayn challenged Johnny Knoxville to an “Anything Goes” match at WrestleMania 38.

– “Liv For Brutality” is the name for the new Tag Team of Rhea Ripley & Liv Morgan.

– Sasha Banks & Naomi vs. Liv For Brutality ended in a DQ when Natalya & Shayna Baszler interfered and attacked everyone. Natalya & Shayna made it clear to Carmella & Queen Zelina Vega that they are also coming after the WWE Women’s Tag Team Championship at WrestleMania 38. Sonya Deville then added them to the Title match at the Show Of Shows.

– Johnny Knoxville accepted Sami Zayn’s challenge for an “Anything Goes” match at WrestleMania 38.

– Pat McAfee was called to Vince McMahon’s Office. Pat then came out of the Office and went to the ring. Pat revealed that he has been told to apologize to Austin Theory for attacking him last week.

– SmackDown Women’s Champion Charlotte Flair destroyed Ronda Rousey in the main event segment. She first choked Ronda with a Kendo Stick and then powerbombed her through the announce table.

Tensions rise ahead of #WrestleMania for @MsCharlotteWWE and @RondaRousey #SmackDown pic.twitter.com/f4lGugu3iy