Current plan is for Lesnar to successfully defend his Universal Title at Royal Rumble 2018 PPV (his opponent for the Rumble isn’t known as the moment) and then defend his Title straight in the main event of WrestleMania 34. This means that Lesnar won’t defend his Title at the Elimination Chamber 2018 PPV.

Below is the description for Elimination Chamber 2018 PPV (it should be noted that Lensar isn’t advertised for the show among the top stars):

“The WWE Elimination Chamber event will air live on Pay-Per-View from T-Mobile Arena in Las Vegas Sunday, Feb. 25, 2018. Fans will have the opportunity to see WWE Raw Superstars battle inside 10 tons of unforgiving steel.

Former WWE Cruiserweight Champion Rich Swann has been arrested for battery and false imprisonment of an adult. He was taken into custody around 12 am on December 10th by Alachua County Florida Sheriff. 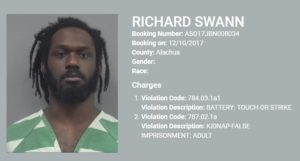 With WWE being very strict in such cases, Swann could be suspended from the company. No word yet on what this means for his #1 contenders match with Drew Gulak on this week’s episode of Raw.

Below is what Pro Wrestling Sheet’s Ryan Satin tweeted about this:

I don’t have any further details at this point on Rich Swann’s arrest. I know he was out with friends earlier in the night at a show, but that’s it.

I’ll try to get more from police but I’m gonna be doing so while on vacation.