During his time in the WWF, he was originally known as “Freddie Joe Floyd”, before he returned for another short stint in 1999, where he wrestled under his real name.

• WWE Willing To Have A Mega Match Soon

After issuing a formal challenge to WWE Champion Drew McIntyre last weekend in a video on Twitter, Heavyweight Boxing Champion Tyson Fury has released another video where he challenged McIntyre to a match.

McIntyre has now issued the following response to The Gypsy King.

“Every time I thought this video was about to end you carried on ? The only thing your doing with that fist is tickling my chin you big feather duster. I’m going to kick that shiny bald head off that dad bod of yours. @tripleh do us all a favor & have a word with this fraud

Unlike you Tyson, I don’t duck a challenge. I’m a fighting Champion. Before I get to you I have some very personal business to handle on #WWERAW”

Unlike you Tyson, I don't duck a challenge. I'm a fighting Champion. Before I get to you I have some very personal business to handle on #WWERAW

WWE EVP Triple H is ready to arrange the match, as he told PA News agency the following:

“We could make Drew McIntyre vs. Tyson Fury work out, Tyson has got my number – we will make a call.

Tyson Fury is one of those fighters that sometimes now finds himself in a position where, does Anthony Joshua want to fight him? Does Deontay Wilder want the rematch? Because he has proven to be maybe next-level from everybody.

If you are able to make a super-fight, a mega-fight like a WWE Champion Drew McIntyre, like a World Champion in Tyson Fury in Boxing, I think we sell out massive stadiums, do record global box office business and that is what it’s all about – so my phone is on. 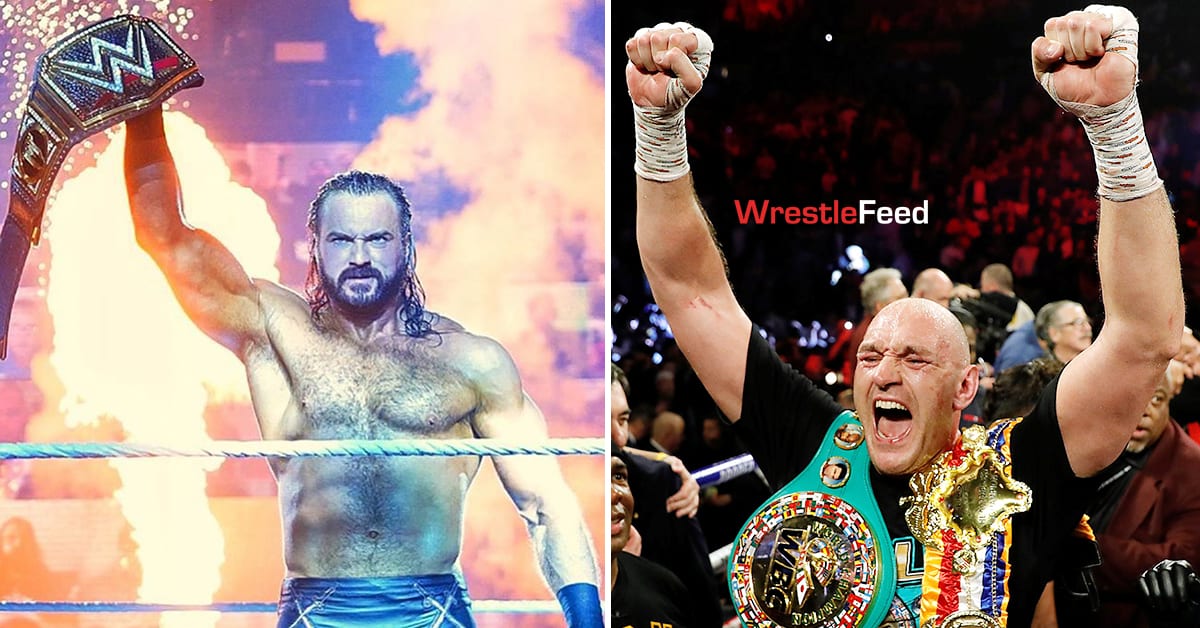 When someone like Tyson Fury comes in, he brings a sport aspect to this, he brings a Boxing World Championship and a popularity in something totally different that helps eyeballs across the board.

We gave him a platform to be the entertainer that he was born to be, sometimes he has that in Boxing but the platform at that level for the entertainment pieces isn’t as big.

It is a win-win for both, Tyson is one of the most professional people I have ever worked with across the board – I spent a lot of time with him a few years ago and I would love to have him back.”

Tyson Fury has only wrestled one match in WWE so far, at WWE Crown Jewel 2019, where he defeated Braun Strowman via Count-Out.