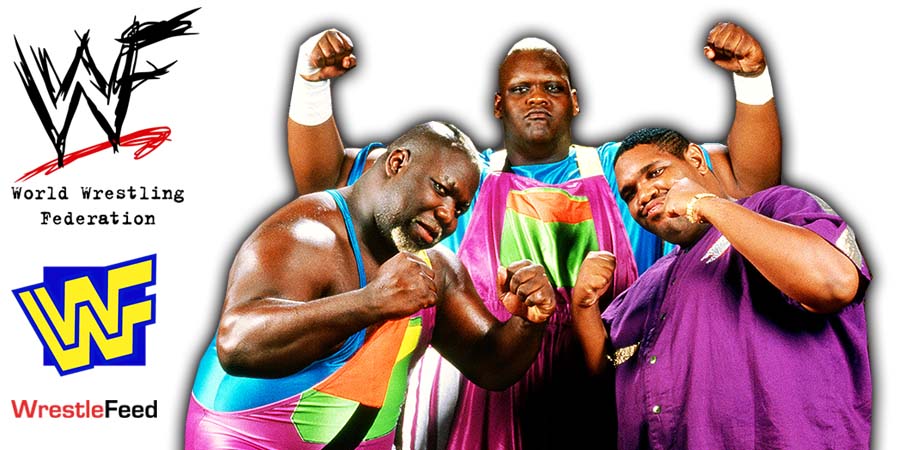 Mo was part of the World Wrestling Federation Tag Team ‘Men on a Mission’ with his team partner Mabel from 1993 till 1995.

Together they won the WWF World Tag Team Championship from The Quebecers on March 29, 1994 in London, England, but lost them back to The Quebecers just 2 days later in Sheffield, England.

Here’s what Chelsea posted on Facebook regarding Mo’s current situation:

“Hey Y’all. As wrestling fans I’m sure you remember Sir Mo, part of the former WWF Tag Team Champions, Men on a Mission.

I know him as dad. I know him as a person who is just as strong as he looks in that ring. And as someone who doesn’t ask for help. But now, that is what he needs. He has been in and out of the Hospital for the past year, and is now looking at a long road to recovery. It would be an absolute help to us, if you could please share this and donate if you can.

You can find the information on my Facebook page.

Thank you so much!”

The link to the GoFundMe site, where you can donate money to pay Mo’s medical bills, can be found by tapping here.

Below is what his GoFundMe page reads:

“Some of you know Bobby Horne as Sir Mo, part of the former WWF Tag Team Champions, Men on a Mission. Some may know him as a wrestling promoter in Tennessee; or from SOAR Championship Wrestling in Texas or maybe the Bumps and Bruises Pro Wrestling Schools in Texas and Arkansas.

Regardless of how you know him, you know he’s a giving man and doesn’t often ask for help. Well, friends, he’s asked for help, and we want to do everything we can to help get him back on his feet.

Bobby Horne has been through the wringer this year. In January, he contracted Covid-19 and we thought we were going to lose him. With being the recipient of a kidney transplant in March of 2018, his immune-suppressing medicines required to allow the kidney to function in his body would not allow him to fight off the virus.

He spent 3 weeks in the ICU and then 10 days in a rehabilitation facility. He tells us after the fact that in some moments, he thought he was already in heaven. But in a moment of clarity, he remembered the things that mattered and held to them, bringing him back for the fight of his life.

After beating Covid, he’s had to rely on an oxygen machine to help him breathe and maintain healthy oxygen levels. He was working on a comeback and full recovery, but the tubes and cords were holding him back.

He was going to the doctors’ appointments, all of them: Cardiologists, Pulmonologists, sleep studies, and his regular family and his long-term kidney specialists.

April 15, he went back to the emergency room due to high CO2 levels. This time, it was so serious that he had to be immediately intubated (ventilator) for two days, and spent 2 more weeks in the ICU.

He was still fighting the anxiety that comes with not being able to breathe and a fear that the oxygen would run out. Finally, he was rounding the curve and getting on track; anxiety was subsiding, breathing and stamina getting better, and he was getting back to the things and people he loves; promoting wrestling and just weeks from returning to leading training at his wrestling schools.

But then another medical emergency struck. Due to complications of a long-time hernia, he required emergency surgery as the his intestines were pushing through his hernia, causing a severe and toxic blockage. The hernia had previously been considered inoperable due to his kidney transplant. It was no longer an option to hold off, the hernia tried to take him out. But our friend is a fighter, still.

After the emergency surgery, and 2 days on the ventilator, we thought things were getting better but there were additional complications that required him to be taken back for another emergency surgery and to be admitted back into the ICU.

Due to these complications, he had to be taken off the immune-suppressing medications to allow his body to heal. Through this, he’s also had to restart dialysis as the kidney function is minimal at best without the suppression medicines. To recover from these surgeries (multiple in just a few days’ time), and to maintain his compromised oxygen levels after Covid, he was again placed on a ventilator, but this time it was for 2 weeks.

Now, there was concern for infection and long-term intubation complications. And the concerns were accurate, he developed pneumonia. Thankfully, the fever was noticed early on, and antibiotics were started, but it was decided a tracheotomy was required to help reduce the stress of ventilation.

He’s also been given a feeding tube into his abdomen as he’s not able to eat. And while this all sounds devastating, we’re told this is a stepping block and the trach and feeding tubes are temporary. He’s now been in the hospital for over a month this round, he’s still in the ICU and he will require long term rehabilitation when he is released. But he’s fighting. He’s kicking out.

Bobby Horne is the guy that would LITERALLY give you the shirt off his back and his last bite to eat. I’ve seen him be hungry but pass his food to someone who joked they were hungry because it might not have been a joke. He really will give away his last cent to help someone else, but he’s now in need of financial support to take care of some medical bills because Sir Mo Lives!”

It was the official pre-show of the ‘WWF Fully Loaded 1999’ PPV.

2. The Godfather vs. Meat