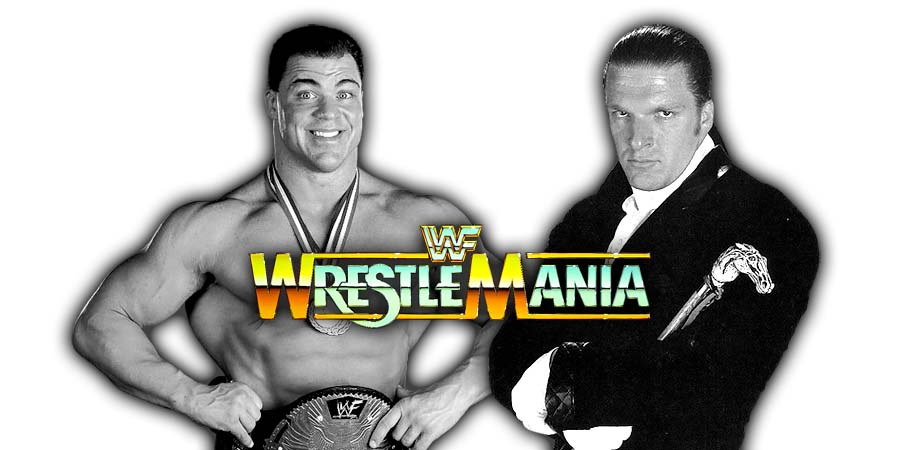 During a recent edition of “The Taz Show” podcast, WWF Veteran Taz talked about Triple H taking Jason Jordan’s spot at Survivor Series 2017 and Kurt Angle being put down again. Below is what Taz said:

“Kurt Angle was completely put down from segment one to the end of the frickin’ show from Stephanie and then Triple H. So maybe they’re gonna go towards a WrestleMania match with Triple H versus Kurt Angle which I don’t think they should do.

Two guys in the twilight of their career in a massive match. Would I be shocked? No. Would it be a good match? Yes. Will people want to see it? Yes. But I think about other things and I think about the younger wrestlers in the locker room and I thought about those younger wrestlers or wrestlers in their prime that were in the locker room last night at Raw because they had to watch Triple H get a spot in this five on five traditional Survivor Series elimination match, a coveted spot. It took a young guy on the come up and pulled him out to put Triple H in there.

I can’t argue, obviously it’s a much bigger match with Triple H in it as opposed to Jason Jordan. I agree. I think that match could have been used to really turn Jason Jordan heel so he cost that team and his dad (in storyline). That’s what they could have done with Jason Jordan. That’s not happening now.

Not only did they make Kurt Angle just look horrible on Raw, but they really made Jason Jordan just look like a punk. But the worst thing is the Kurt Angle thing. Kurt, he’s got all this credibility. He’s the most credible guy on a shoot in our industry’s history, let’s be frank.

And he’s a 13 or 14 time World Champion and Olympic Gold Medalist. And somehow, someway they managed to make him look dead last night. Stephanie coming out and just undressing him again. I understand he’s subservient to Stephanie. And then Triple H comes out, he’s subservient to Triple H.

It’s just not what you want to do with your General Manager and the guy leading this Raw team and a guy with the credibility & ability of Kurt Angle. It’s just dumb. And it was all to give that spotlight there at the end the day to that Triple H character, let’s be frank.

I’ve heard so much for so long how these young wrestlers in NXT love and they adore Triple H and they should. He does give them opportunity and I know he helps them. He gives them advice and I know that Triple H is probably awesome at that. I’ve put him over a lot out on a show for how great of a job he does with NXT.

He’s an excellent mentor. He’s done an excellent job with those young talents, but if he gets the opportunity because he wants it or whatever the reasons are, whoever’s idea it was, when that happens and Triple H gets a chance to lace his boots up, he’s gonna, he’s gonna not just take the spotlight from any young guy and he’s gonna eat up the spotlight.

I’m telling you the truth, the politics you know. It’s set up perfectly for what we witnessed. Let’s be honest, you know that Triple H having a major spotlight and it goes past Survivor Series. It’s bigger than the five on five traditional Survivor Series match.

It doesn’t matter. It’s all about The Game as the song says so.“