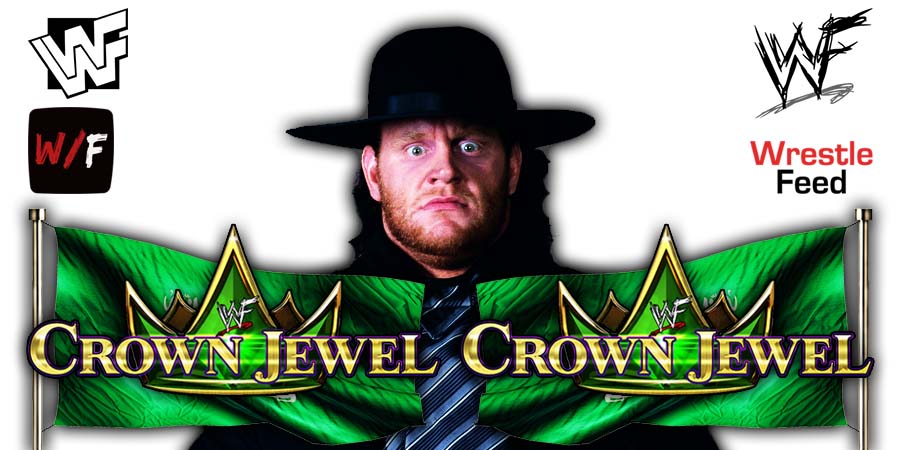 • Are The Rumors Of The Undertaker Returning At WWE Crown Jewel 2021 True?

There are some videos circulating on Social Media, which show that The Undertaker is in Saudi Arabia.

This began rumors that he will return to WWE programming at tomorrow’s Crown Jewel 2021 pay-per-view.

UPDATE: The Undertaker Is In Saudi Arabia (Video)

However, these rumors are not true, and the videos circulating are from 2019.

The Wrestling Observer killed these rumors with the following update:

“There is a big rumor in Saudi Arabia about The Undertaker returning at Crown Jewel that has gotten mainstream coverage. There’s been promotion on social media that teases his appearance that has circulated on social media for the last 10 days or so.

To clarify, the video making the rounds that has caused the rumor is from 2019 and there doesn’t appear to be anything to the story.”

Also Check Out: WWE Makes A Change To The Crown Jewel Set

• On This Day In Wrestling History: Old School Wrestling Legend Passed Away

On this day in 2014, we lost Old School Wrestling Legend Ox Baker (Real name: Douglas Baker Sr.) at the age of 80 due to complications from a heart attack.

Those of you who weren’t fortunate enough to see him in the ring during his professional wrestling career, will certainly remember him for his role in John Carpenter’s movie “Escape from New York”, where he fought Kurt Russell.