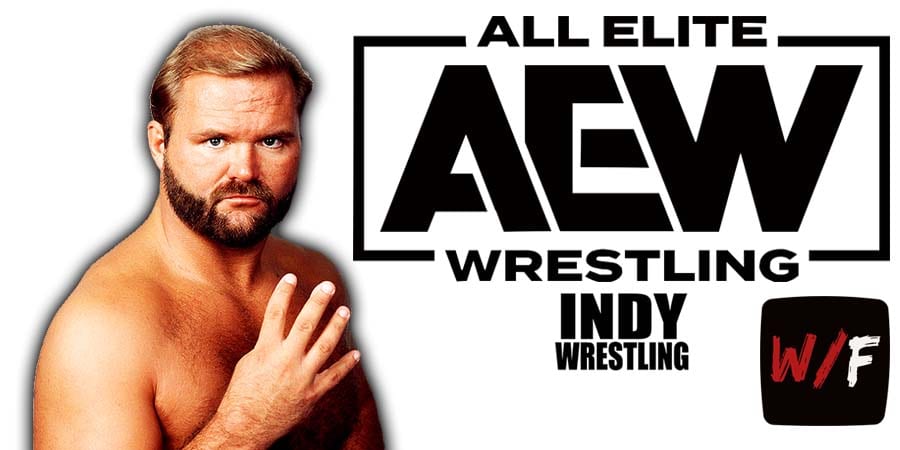 • Arn Anderson Reveals If He Really Carries A Gun With Him

Over a month ago, Old School NWA/WWF/WCW Legend Arn Anderson teased carrying a gun with him during an AEW in-ring segment with Cody Rhodes, in which he said the following to Cody:

“You pull up to a red light, a man jerks the car door open and says, ‘Out of the car, I’m taking your car.’ You say, ‘Okay, take it. Just don’t hurt me.’ You know what I do? I pull out the Glock, put it on his forehead, and spill his brains all over the concrete. I’m Arn Anderson! And all that implies, and I’ll be damned if I’m gonna coach a loser.”

On a recent episode of his weekly ‘The ARN Show’ podcast, he cleared things up and revealed that he has never carried a gun.

Here’s what the former WWF World Tag Team Champion had to say:

“Okay. That was meant to be a metaphor and to let everyone know that I am through being a victim, I’ve had enough, and I am not a victim, I am a predator. I just used a very extreme example. I don’t carry a gun. I have never carried a gun in person.

So it was meant to be what it was and I think the shock value was the spilling of the brains, painting the sidewalk with the brains, I think is probably what had everybody go, ‘Whoa! Okay. Alright.’ 99% of everything I read or saw understood. Don’t take it literally. People got it.

Yeah, but I would still suggest you don’t jerk my [car] door open and say you’re going to take my car. Let’s just say guns are not part of my everyday thought process or life, but I do agree that sometimes you have to protect what’s yours. A car door getting opened with some torque behind it right on your kneecaps, that’ll probably change your afternoon around a little bit.”

Also Read: Arn Anderson On Why He Stayed With WWE For 18 Years