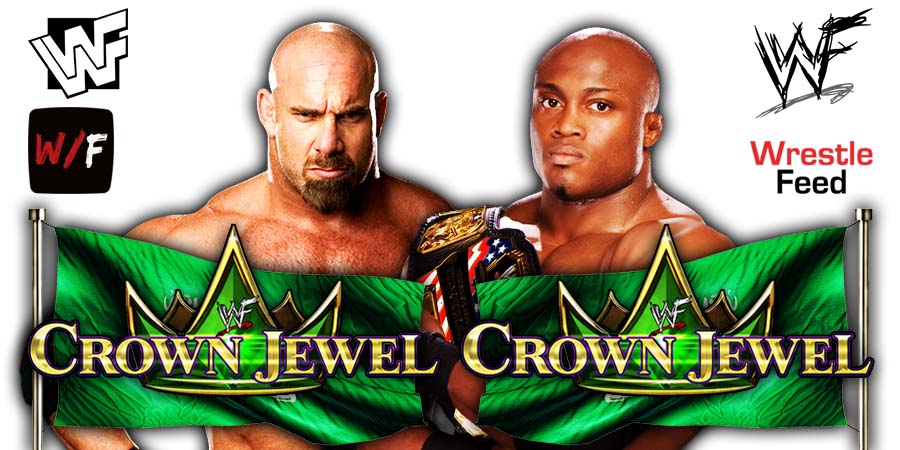 WWE makes huge money from their Saudi Arabia PPVs. They signed a 10-year deal in 2018, where they would do 2 big PPVs every year in that country.

WWE uses their top part-timers / special attractions for these PPVs, and they get paid in millions.

Brock Lesnar has worked all the Saudi PPVs so far, and he reportedly gets paid about $1.5 million for a single appearance on these PPVs.

WWE Hall Of Famer Goldberg has wrestled two matches at Saudi PPVs so far. He lost to The Undertaker in the first one and beat “The Fiend” Bray Wyatt to win the Universal Championship in the second one.

His 3rd match at a Saudi PPV is scheduled to take place at this month’s Crown Jewel 2021 pay-per-view, where he will face Bobby Lashley in a SummerSlam rematch.

According to the Wrestling Observer, Goldberg has very lucrative deal with WWE for Saudi Arabia matches, and there’s no way he will allow WWE to reschedule his match to RAW in order to get ratings:

“The other match that is going to be there is Lashley and Bill Goldberg, because that one won’t be put on TV, because Goldberg does have a specific deal with the Saudi shows that is very lucrative and if you were gonna pull his match to put it on TV he wouldn’t be happy at all. That’s millions of dollars of difference.”

Most old school wrestling fans will remember him for teaming up with Ole Anderson as ‘The Minnesota Wrecking Crew’.

Gene trained Ken Shamrock and turned him into a professional wrestler, before Ken gained major fame as a mixed-martial-artist in the early days of the UFC.