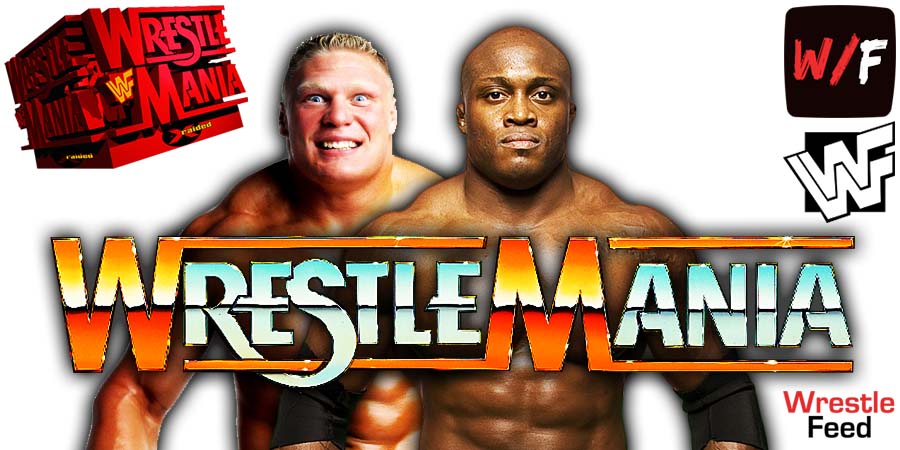 However, on the day of the show, WWE announced that Roman is COVID-19 positive and won’t be competing, so Lesnar was added to the WWE Championship match on that night, which he won.

This led to a match between Lesnar & Bobby Lashley at Royal Rumble 2022, where Lashley won the WWE Championship due to interference from Reigns. Paul Heyman also turned on Lesnar during this match.

Lesnar then went on to win the Men’s Royal Rumble 2022 match and chose Reigns as his opponent for WrestleMania 38.

During an interview with Bleacher Report, Lashley said that he thinks him and Lesnar would’ve main evented one of the nights of WrestleMania 38 if Reigns vs. Lesnar ended up happening at Day 1.

“Him and Brock had feuds, they had stuff going on before. If Roman didn’t catch COVID, me and Brock would probably be headlining WrestleMania, because him and Roman were deep in, I guess, their custody battle (of Paul Heyman). I guess that’s what it is (laughs).”

Lashley is scheduled to defend the WWE Championship against Brock Lesnar, Seth Rollins, Riddle and Austin Theory inside the Elimination Chamber on February 19 in Saudi Arabia.

Also Read: Possible Plan For Bobby Lashley If He Loses The WWE Championship

Spicolli wrestled for all the big 3 promotions of the 90s. After doing televised jobs for the company for years, he joined the World Wrestling Federation full-time as Rad Radford (1995-1996), before working for Paul Heyman’s Extreme Championship Wrestling (1996-1997) and eventually joining Ted Turner’s World Championship Wrestling in 1997.

Louie was scheduled to wrestle Larry Zbyszko at the WCW SuperBrawl VIII PPV, but that match never happened, because Spicolli passed away from a drug overdose one week before the event.