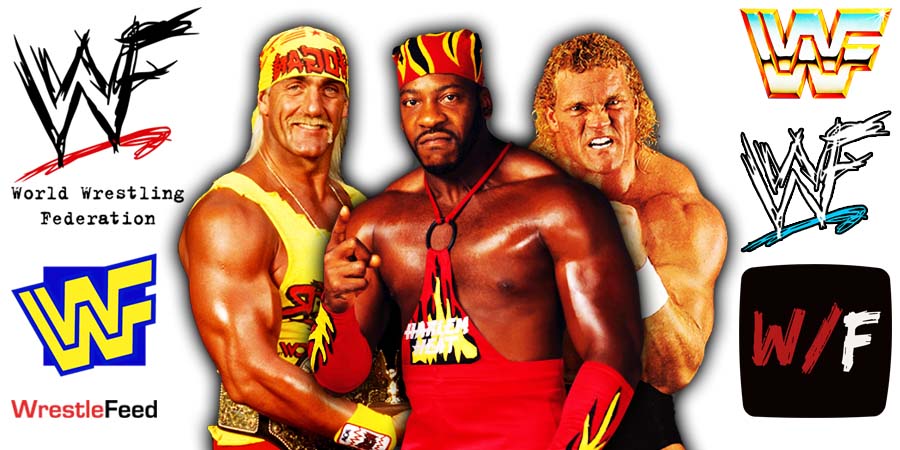 During a recent interview with Kristian Harloff of The Big Thing, 2-time WWE Hall Of Famer Booker T talked about Hulk Hogan and Sid Vicious helping him and brother Stevie Ray during the WCW days.

There’s a rumor, that Hulk Hogan got paid money as well for doing that. I have always given him props for speaking up for my brother and I, but there’s a rumor that he made money off of merchandising from Harlem Heat being successful, but I thank him for putting the word in for us.

The person that was instrumental in my brother, in our, in my career, was Sid Vicious, who put us on the map. Sid Vicious was the guy who let us live in his apartment for like three months.

I first got there (WWF) and I left all my accolades back in WCW. I said I’m gonna come here and prove to these guys, like I tell my students, you gotta know how to make it in a locker room before you can make it in the ring.

I said, OK I’m gonna leave all that behind and I’m gonna prove to these guys that I wanna be one of the boys. After a few months, dressing in the locker room with all the wrestlers around, you know, 60 guys. Undertaker, I was walking past him one time, he was like, ‘hey man, why don’t you come over and dress here with us?’ and it’s a locker room called the TV locker room where all the cameramen keep their equipment.

There’s very few of those guys that be in there because they’re running around the arena all day, so the top guys would normally go in there. I got invited to the TV locker room, I was like wow I guess I made it, I guess I’m one of the boys now.”

Below are Booker T’s major accomplishments in Pro-Wrestling:

After touring the territories for several years, he wrestled for the World Wrestling Federation from 1987 until 1990, and then worked for Ted Turner’s World Championship Wrestling in 1991 and again from 1995 till 1996.

The last time he was seen on television was at WrestleMania X-Seven, when One Man Gang was a participant in the famous Gimmick Battle Royal.