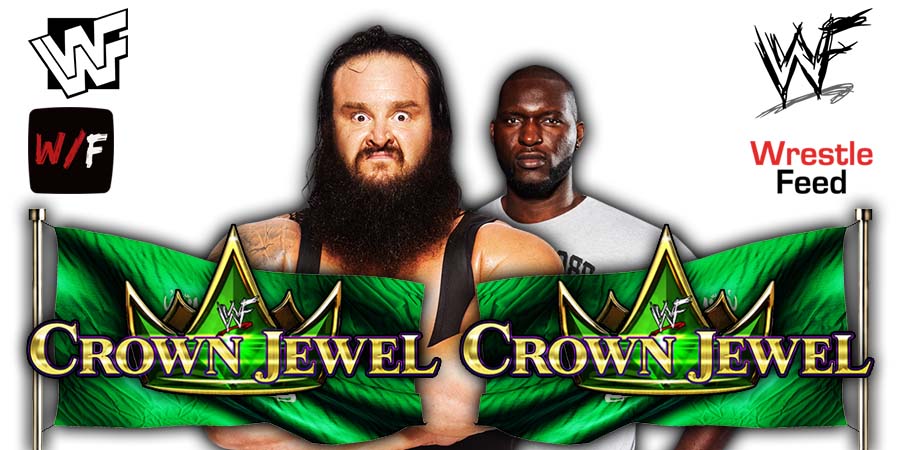 • Braun Strowman Has Backstage Heat In WWE After Recent Comments

After WWE Officials were pleased with how Braun Strowman vs. Omos went at Crown Jewel 2022, Strowman began bragging about it on Twitter.

“Holy hell @TheGiantOmos can you believe we got 47 ⭐️⭐️⭐️⭐️⭐️ and reminded the people that no one cares about all these floppy floppers. Giants and Monster > flippy flipper.”

When he received backlash from other wrestlers, Strowman replied:

“Yo yo all my brothers and sisters in the locker room no matter where you came from. I have mad respect. We have all worked very hard to be where we are. And all are here for a reason. Take a joke iwc. Y’all come at me none stop and the second I fire back y’all melt.”

Strowman then called himself the greatest big man in pro-wrestling:

“Aight I’m going to sleep on this flight. Just let me remind you I am the greatest big man there ever has been there ever is and there ever will be!!!!!!!! If you at me you prove the point. Good night to all my loyal fans and the rest welll GFYS 💋💋💋💋 monster out”

According to Fightful Select, there is said to be backstage heat on Strowman. While the WWE management is happy with how Braun conducts himself backstage, they are not happy with his behavior on Social Media.