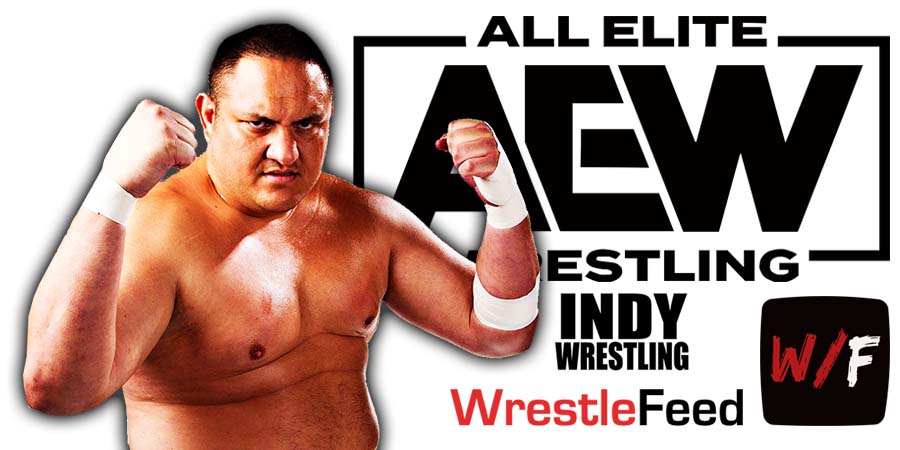 Samoa Joe showed up at tonight’s ROH Supercard Of Honor show. Soon after that, Tony Khan announced that Joe has signed with All Elite Wrestling.

Joe will make his AEW debut on Wednesday’s episode of Dynamite.

It’s official! @SamoaJoe is ALL ELITE! See you on Wednesday at #AEWDynamite! #SupercardOfHonor @AEW pic.twitter.com/n29KnFhCBP

Below are the complete results from AEW-ROH Supercard Of Honor:

Lethal turned heel during this match. He attacked Sydal after the match.

Young Bucks attacked The Brisoces after the match. FTR challenged The Bucks to a match, but The Bucks said they will have to wait till Dynamite.

After the match, Jay Lethal & Sonjay Dutt joined forces and attacked Gresham. Samoa Joe then made his return to Ring Of Honor Wrestling. He chokeed out Dutt and had a staredown with Lethal.

WHAT A RETURN TO #ROH WE ARE WITNESSING RIGHT NOW! @SamoaJoe just arrived and business has picked up! What an incredible night it has been at #SupercardofHonor! pic.twitter.com/P5ssPlI333

It was broadcasted from the the CSU Convention Center in Cleveland, Ohio and featured matches, interviews & storyline segments on the road to the ‘WCW Slamboree 1996’ PPV.

2. The Steiner Brothers vs. The Road Warriors vs. The Nasty Boys