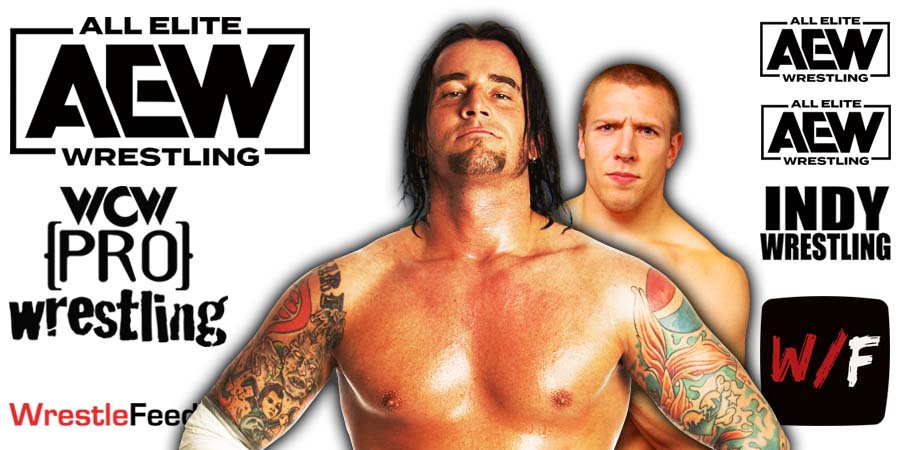 – Tony Khan kicked off tonight’s AEW Dynamite and revealed that he is the new owner of ROH Wrestling.

– Chris Jericho said if Eddie Kingston defeats him at Revolution, he will shake his hand and give him respect, but if Kingston loses he will laugh in his face and tell him to GFY.

Punk questioned if he is to blame for the person MJF became, because he never blamed Steve Austin when “lesser men” told fans that Austin took his ball and went home.

Punk brought up some of the bad things he has done in the past, including pouring alcohol on an alcoholic and covering The Undertaker (who he referred to as a legendary wrestler) in Paul Bearer’s ashes.

Punk said right now an 11 year old kid is looking up to MJF the same way MJF did to him and wants to make peace.

The two shared a hug, but then MJF low-blowed Punk. MJF busted Punk open and said at Revolution he will show him that he’s the devil in the flesh. He called Punk a stupid old man and called himself a snake.

Sting, Darby Allin and TNT Champion Sammy Guevara then made the save for Punk.

"All that hate is not going to keep you warm; it's going to burn you up." @CMPunk delivers some advice to @The_MJF. Watch #AEWDynamite LIVE on TBS right now! pic.twitter.com/yc5nEUIqGc

This wasn't a scene we were expecting between @The_MJF and @CMPunk here at #AEWDynamite… We are LIVE on TBS right now! pic.twitter.com/x2deF9axGS

Okay, well that's what we were expecting. @The_MJF proves why he is the Scum of The Earth! #AEWDynamite is LIVE on @TBSNetwork right now! pic.twitter.com/y9Z7Tidq6r

"I'm going to show you and all these mindless sheep that I'm the devil himself!" @The_MJF delivers a bloodied @CMPunk a chilling message! Watch #AEWDynamite LIVE on TBS right now! pic.twitter.com/lWOernyu4H

– Wardlow def. Cezar Bononi (After the match, Shawn Spears tried to hit Cezar with his Steel Chair, but Wardlow stopped him)

– In a backstage segment, MJF said if Wardlow wins the Face of the Revolution Ladder match and the TNT Title, he’ll let Wardlow keep the title, but doubts that’s gonna happen.

Wardlow said he’s been busy making sure MJF wins his matches. MJF slapped Wardlow and reminded him that he signs his paychecks (not AEW) because he’s his bodyguard.

– The House Of Black said that they gave Death Triangle new meanings of sight and violence.