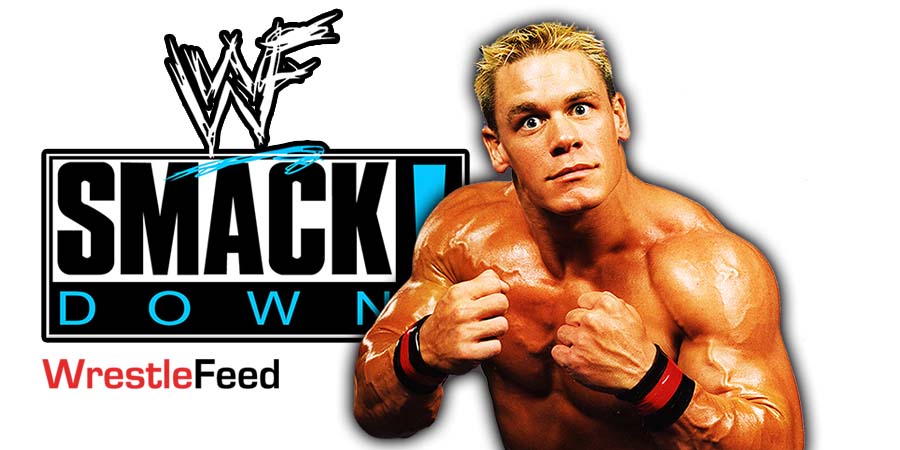 – SmackDown kicked off with John Cena. Cena said he changed his middle name to Guardian because he needs to protect the last bit of respect WWE has, because SmackDown with Roman Reigns as the Universal Champion sucks. Cena then asked the fans whether they will be on Team Cena or Team Roman Reigns.

Paul Heyman interrupted. Heyman said Cena has it all wrong. Heyman promised that Roman will give him his answer when he’s good and ready. Heyman then mocked Cena’s theme song before he left.

– Baron Corbin said he made $0 from the Corbin Fund, and believes the person who made the website ghosted him, and stole his credit. Corbin said he even had to get on the Bus to get to SmackDown.

– Kevin Owens helped Baron Corbin by giving him $20. Shotzi & Nox accidentally shoot Corbin in the nuts with their Tank. Dolph Ziggler & Robert Roode then stole the $20 and laughed at Corbin, but Owens came back to make the save.

– Edge said he should be the Universal Champion today, but he was screwed over by Seth Rollins. Edge said Rollins opened a Pandora’s Box of pain coming his way. Edge reminded Rollins that he was in The Brood and The Ministry of Darkness, and has no idea of the depths that he will sink to.

Rollins interrupted and mocked Edge by referring to him as Grandpa Edge. Rollins said Edge has been a scumbag to him and if he keeps pushing, he will have to end him. Rollins reminded Edge that 7 years ago he could’ve stomped on his neck, but he hesitated. Rollins said he won’t hesitate a second time.

They got into a brawl, which ended with Edge standing tall.

– Universal Champion Roman Reigns came out for the main event segment and asked the Cleveland crowd to acknowledge him. He even told the fans watching at home to acknowledge me. Reigns then called out John Cena for putting on a nostalgia act at Money In The Bank.

Roman compared Cena to Missionary Position, the same boring thing every time. Reigns said Cena is right, he can’t see him…because he won’t face him in the main event of SummerSlam.

Finn Balor then came out. Roman asked Finn if he’s here to acknowledge him. Finn then asked Roman if he’s interested in his challenge instead of Cena’s challenge.

Fans then began chanting “Roman’s Scared”. Roman then accepted his challenge and SmackDown went off the air.