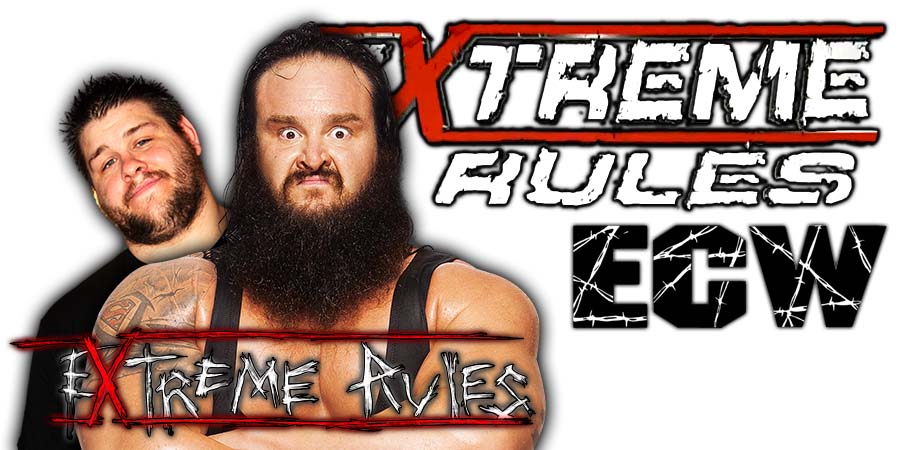 Up next is the Steel Cage match. Mr. Money In The Bank Braun Strowman makes his way out first followed by Kevin Owens.

The match begins and Owens immediately starts climbing the cage to escape and win the match, but Strowman catches him and begins beating the crap out of him.

Owens comes back into the match for a while and hits a Frog Splash and goes for the pin, but Strowman kicks out at 1!

Owens nails a Stunner on Strowman and then tries to escape the cage through the door, but Strowman catches him and slams the door in the face of Owens.

Owens handcuffs Strowman to the top rope and then begins punishing Strowman. Owens begins thrash talking and Strowman immediately catches Owens by the throat and hits a one-handed Chokeslam!

Owens gets up and tells Strowman to ‘Suck It’ and throws him a kiss. As Owens is escaping the cage Strowman breaks his handcuffs and both men get on top on the cage wall and Strowman Chokeslams Owens off the top through the announce table!!!

However, Owens has won the match now.

CHOKESLAM FROM THE TOP OF THE STEEL CAGE THROUGH THE ANNOUCE TABLE!!!!! @BraunStrowman #ExtremeRules pic.twitter.com/i3Vmkh8HM0

Kevin Owens def. Mr. Money In The Bank Braun Strowman in a Steel Cage match via escaping the cage