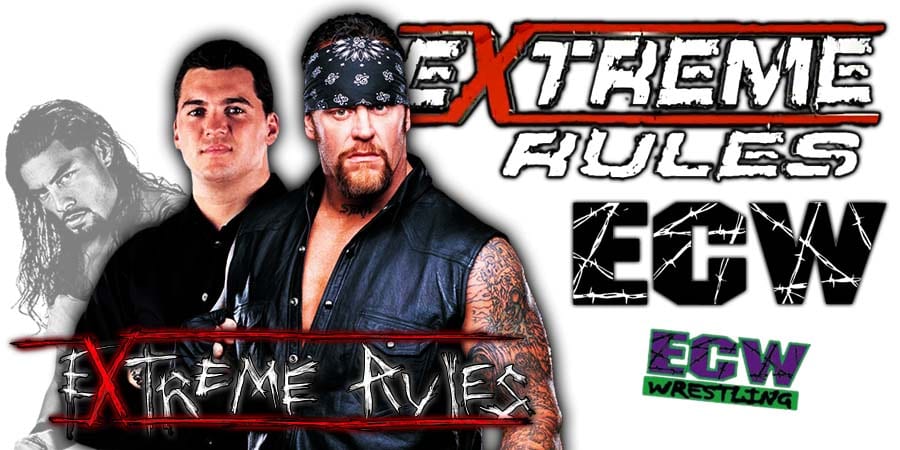 The Extreme Rules 2019 main show kicks off in a huge way with the No Holds Barred tag team match!

Shane McMahon & Drew McIntyre are shown walking backstage and then we get a promo package for this match.

“The Big Dog” Roman Reigns makes his way out next, followed by “The Phenom” The Undertaker to a huge pop!

The Undertaker is sporting a different type of vest tonight, something we have never seen before. The Undertaker is looking similar to what he looked in 1999 during his Ministry of Darkness days! 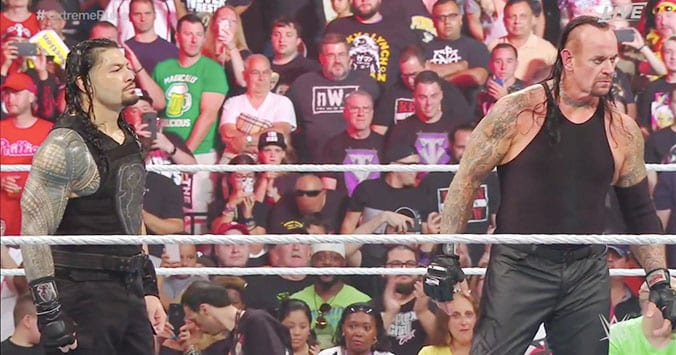 Reigns begins the match and dominates. Reigns tags in Taker to a big pop and Taker begins dominating Shane.

Taker twists Shane’s arm and hits him with a Leg Drop on his arm. Taker goes for Old School, but Shane stops him. Shane delivers a series of punches to Taker, but Taker comes back with his own shots, followed by a Clothesline!

Taker delivers Old School to Shane and the crowd chants ‘you still got it’!

Shane tags in McIntyre and Taker and Drew are now face to face! Drew hits a headbutt and both men start exchanging blows! 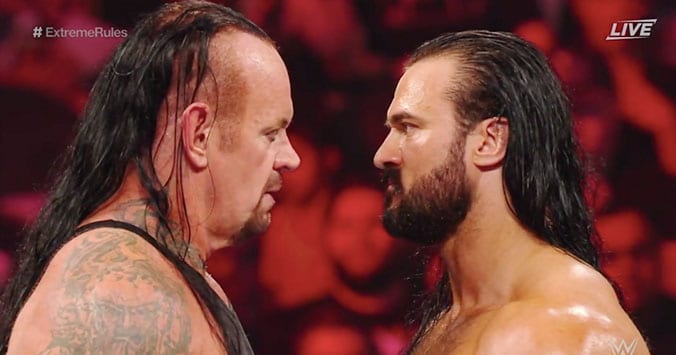 Drew clotheslines Taker out of the ring, but Taker lands on his feet and pulls out McIntyre. Taker hits the Leg Drop on Drew on the apron!

Taker tags in Roman and Roman begins working on Drew. The action gets to the outside and Taker grabs a Steel Chair, but Shane runs away.

Reigns tags in Taker and Drew tags in Shane. Taker begins dominating Shane and hits a clothesline in the corner, followed by Snake Eyes and a Big Boot. Taker then punches Drew and clotheslines Shane out of the ring.

Taker is now clearing the announce table and is looking to deliver a Last Ride, but Elias attacks Taker with his Guitar!

Reigns attacks Elias, but Drew takes out Reigns. Elias is looking to hit Taker again, but Taker grabs Elias by the throat and Drew hits Taker with a Claymore!

This heel trio is now placing Taker on the announce table and Shane is on the top rope and hits the flying elbow drop on Taker through the table!

Elias & Drew are now picking up Taker and taking him into the ring to pin him. They are now setting Taker up in the corner with a Thrash Can for the Coast To Coast!

Shane mocks Taker with the RIP taunt and hits the Coast to Coast! Reigns comes back and hits Elias with the Superman Punch, but Drew hits Reigns with the Claymore kick.

Massive #CoastToCoasts, chilling #Chokeslams, and… WHAT IS @IAmEliasWWE DOING HERE?!

Undertaker sits up out of nowhere and delivers a thunderous Chokeslam to Shane! Taker chokeslams Elias as well!

Taker is looking to hit the Tombstone, but Drew is waiting to attack him from behind and Reigns hits Drew with the Spear!

Undertaker hits a Tombstone Piledriver on Shane McMahon to pick up the win for his team! 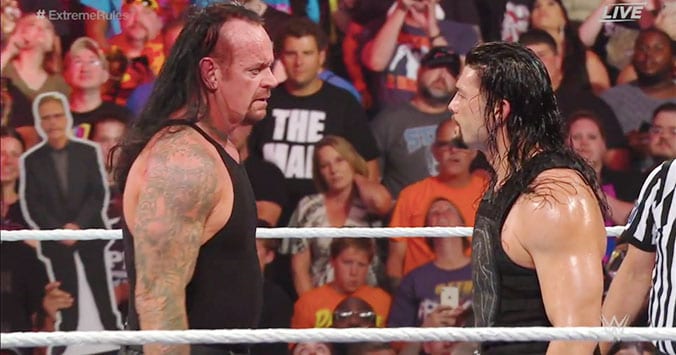 The Undertaker shows respect to Reigns after the match.

Part 3 of our Extreme Rules 2019 live coverage is HERE.