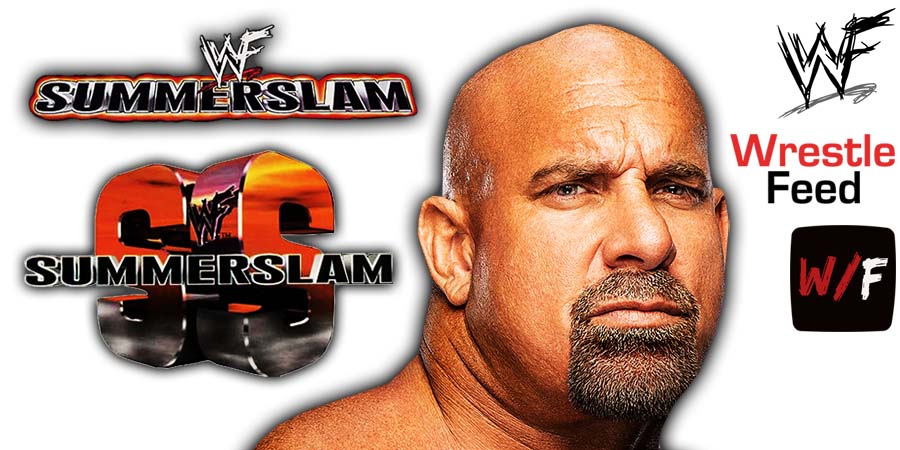 • Goldberg Wants A Match Against WWE Legend After SummerSlam 2021

This Saturday night, WWE Hall Of Famer Bill Goldberg will challenge Bobby Lashley for the WWE Championship in the co-main event of SummerSlam 2021.

During an interview with DAZN, Goldberg was asked if he wants a match against WWE Legend John Cena (who will compete for the Universal Championship at SummerSlam) and here’s what he said:

“Cena, that’s always been a dream. Never been in the ring with him. We’re two completely different characters. Hey, you never know. You never know.”

As we noted earlier, Goldberg was also asked during this interview if he wants to face RAW wrestler Riddle.

Despite whatever has happened between them, Goldberg went on to praise Riddle and would be open to facing him:

“Yeah. The cocky kid spouting off his mouth in the beginning, and I didn’t appreciate it very much by any stretch of the imagination. But the guy has put in a lot of frickin hard work, and he’s dedicated his life to this business.

Whether I like him as a human being or not, I have to understand and appreciate his passion for the business and his work ethic. Because he works hard and that I appreciate as an athlete and as a human.

Is he a prick sometimes? Absolutely. But that’s him. That’s his character, and so am I.”

Also Read: Riddle Reveals What Goldberg Said To Him Backstage On RAW Recently

It was broadcasted from the Hartford Civic Center in Hartford, Connecticut and featured matches, interviews & storyline segments on the road to the ‘WCW Fall Brawl 1998’ PPV.

Goldberg vs. The Giant