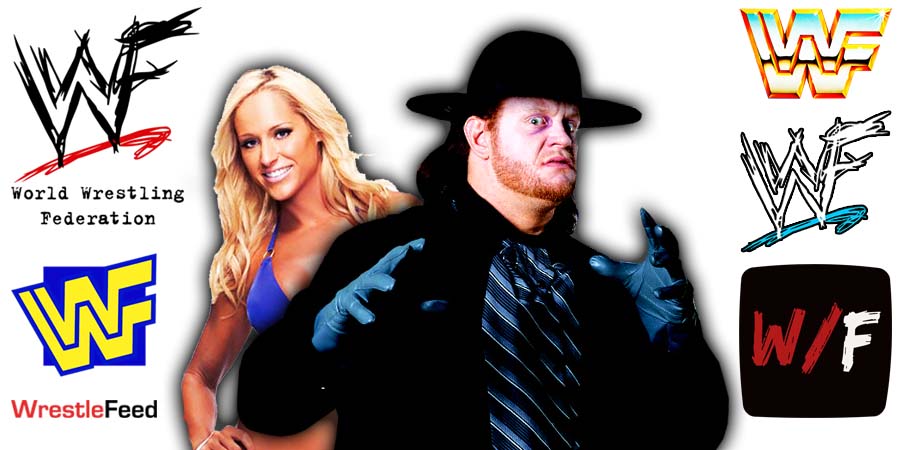 During a recent interview on the Wives Of Wrestling podcast, Michelle McCool talked about getting recognition for paving the way for the female wrestlers of the current generation.

McCool then addressed what some fans say – that WWE only recognizes her nowadays because of her marriage to The Undertaker.

Michelle said she never asked for her husband’s help during her time in WWE:

“I couldn’t care less what people think about me. It’s nice to get some recognition that we did play a part in that.

There was one occasion that a guy really popped off for no reason, but it’s because he was dating somebody else, that I had to beg him (The Undertaker) not to step in.

I was like, ‘Look, I think I could beat this guy up if I needed to so I don’t even need you,’ but as far as pitching storylines or whatever, I never once, and I made it a point not to do that.

It’s nice to get a little recognition that we did pave the road because we fought for everything we had. We had to fight to even get the Divas Title. It is what it is, but every minute counts.”

Below are McCool’s accomplishments in WWE:

Also Read: “Somebody called 911, said I had killed The Undertaker with a sledgehammer” – Michelle McCool

His greatest accomplishment was probably winning the WWF Tag Team Championship with his kayfabe brother”Luscious” Johnny Valiant on an episode of WWF Championship Wrestling, that was taped on March 6, 1979.

Jerry Valiant passed away in 2010 at the age of 68 after a battle with Alzheimer’s disease.