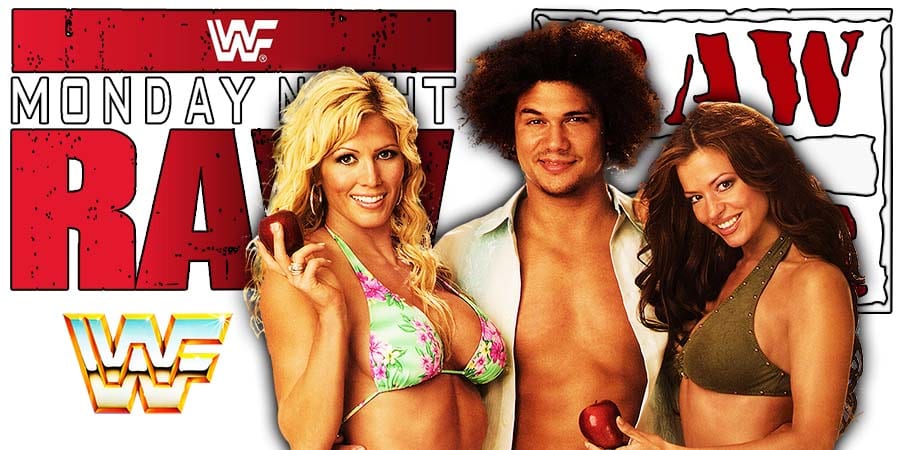 • “It was falsely promoted. I was never asked to be there” – Former Champion Reveals Reason Behind Absence From RAW Legends Night

WWE had advertised a lot of people for this week’s RAW Legends Night, but not all of them were in attendance for the show.

Alongside Kurt Angle, Mick Foley and Carlito, former WWE Women’s Champion Candice Michelle was also one of the people who were advertised for the show, but didn’t appear on it.

While speaking to WrestlingInc, Michelle revealed that she was just being promoted for RAW and never got the invitation to attend it.

On not appearing on RAW Legends Night:

“The truth is I just simply didn’t make the cut, but I always make the headline. It really did take me back to the Super Bowl. I get cut from the Super Bowl, but I still make the headline. I come into WWE, and I win the 24/7 Championship. And people are like, ‘Why does she get it? How does that work?’ But the reality is it’s all the work behind the scenes, and I wanted to come on here and have some big answer for you guys, but I was just never called.

It was falsely promoted. I was never asked to be there. I would have loved to be there. I love WWE anytime they call me, super honored to go there and be called a legend. And as we know, for whatever rhyme or reason, I just wasn’t meant for that show, but having you kind of feature me on your site is kind of better because I’d probably be on the stage doing nothing with 30 other people who are much more famous than I am, and now I get to come on here and actually just have a nice little moment with you guys and talk about how we all get cut in life.

It doesn’t happen to us. It doesn’t happen for us, but maybe it happens from us. Where do we need to go in this life? How do we take that and not feel like we’re not good enough? Or it’s not meant for us or somebody else was better than us.”

On when she found out about Legends Night:

“Full disclosure, I’ve just been busy at home. I had no idea they announced me. I was actually in Orlando, which is ironic, and I was hanging out with Torrie. We got to go to Disney World having a magical time, and she told me how she was going to go to RAW. I was like, ‘Oh, what are you gonna do?’ ‘Legends Night,’ and I was like, ‘Oh, that’s awesome,’ and I just didn’t think I was invited. I thought ‘Oh, she’s in the Hall of Fame. They’re inviting Hall of Famers.’ That’s not where I’m at with the company, yet.

So, I just thought that was it. And then I happened to look at the announcement and see who’s going to be back. Hulk Hogan and Ric Flair, some of the greatest wrestlers that I love, and then I saw my name on a list. And I was like, ‘Wait, I’m on the list, but they didn’t call me.’ It’s just a simple thing. I just didn’t make the cut.”

On fans being disappointed that she was not appearing:

“That’s such an honor to hear because I’m launching a new business and a new product, and quite frankly, I take it like it’s my responsibility on why I didn’t make the cut. I haven’t been active on social media.

I haven’t been out in the public eye, and for all they know, I could be over here and weigh 500 pounds and look like a sea monster. The reality is COVID hit. I have three little girls, and I’m homeschooling and I’m creating a large platform to launch something in March.

When you’re working behind the scenes, sometimes a break from social media just kind of happened and really, also, just processing life myself. We have so much political stuff happening, COVID, people love you [and] people hate you, and I’m like, you know what, let me get my bearings together before I can help coach and teach other people as well.”

Also Read: “I don’t want to travel across the country just to do a 2 minute cameo” – Carlito’s Alleged Reply To WWE About RAW Legends Night