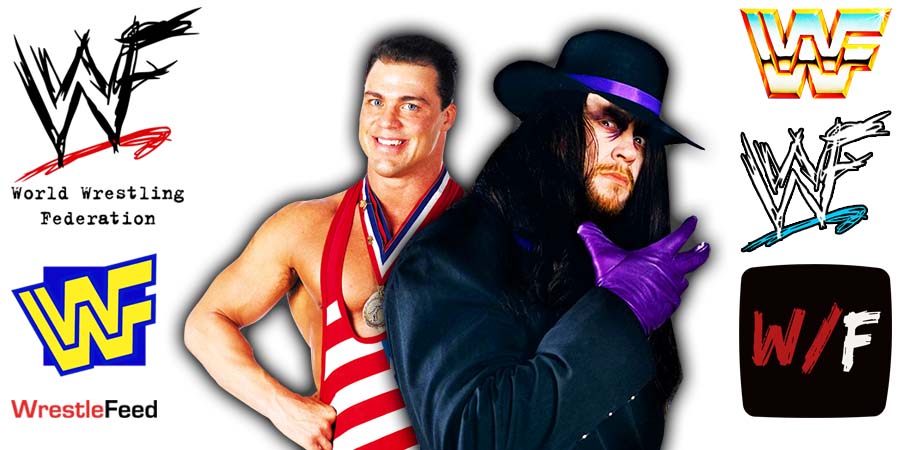 During a recent episode of his podcast, WWE Hall Of Famer Kurt Angle talked about The Undertaker getting inducted into the Hall Of Fame this year.

Angle was asked which is The Deadman’s most painful move. Below is what the Olympic Gold Medalist said:

“Without a doubt The Last Ride. You want to make sure you don’t have to go to the bathroom when you take it. It will knock the sh*t out of you, the air out of you, the piss, everything.

You’ll go to the bathroom in your pants with that move alone. Empty everything before.”

Kurt said the following about his No Way Out 2006 match with The Phenom:

“We had that textbook wrestling match. This match at No Way Out really did have all the ingredients in it to be a perfect match. There was a lot of wrestling, a lot of submission tradeoffs, a lot of false finishes. The match told an incredible story.

We wanted this match at WrestleMania, but unfortunately, we didn’t get it.”

Kurt Angle managed to pin The Undertaker in this match to retain the World Heavyweight Championship.

Also Read: The Undertaker Comments On Vince McMahon Inducting Him Into The WWE Hall Of Fame

In WCW, he was most famous for teaming up with “The Nature Boy” Ric Flair’s son David Flair, and they were joined by valet Daffney.