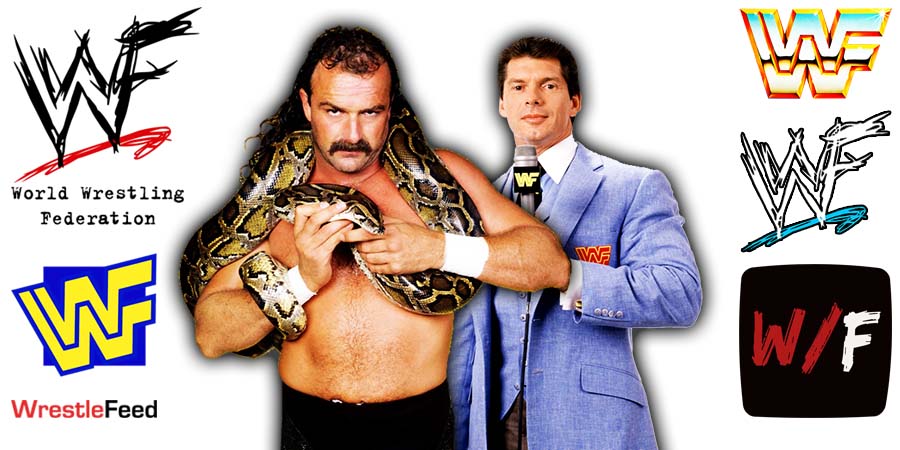 During an episode of the DDP Snake Pit podcast, WWF Legend Jake Roberts talked about his marijuana use and said Vince McMahon banning it in the World Wrestling Federation caused a lot of trouble for the wrestlers.

Roberts then explained why marijuana is better for the wrestlers than alcohol. Below is what he said:

My routine, in the beginning, was beer, a little pot, a little sleeping pill. And then Vince came along and cut the pot out. Man, when he cut that pot out, that was tough, because we didn’t have a go-to thing to relax us now.

We had to double up on the beer. Then a lot of us started taking different pills and that leads to problems. When you start mixing your drugs, you’re going to kill yourself. That’s gotten a lot of guys. They start mixing them. They take a pill, they have a few beers, they pass out, and they wake up and they think ‘wait a minute, I didn’t take my pills!’ And they take more.

That’s your danger zone. That’s when you’re flying into the fire, you know? And you can’t get away from that skillet, man. Once you get burnt, you’re in trouble.

I’ve seen a lot of good people go down hard. Terry Gordy was probably one of the hardest that went down. He died on an airplane. And they brought him back, but they didn’t bring him back soon enough. Half his mind was gone. Terry was one of the greatest wrestlers ever, and there was a time he had to learn how to wrestle again, because he had forgotten everything, because of that incident.

There was a time that the drug people were coming after Vince and a lot of the talent because guys had drugs shipped to them from this doctor, which now you’ve opened up a whole another can of worms.

So somebody had drugs sent to them and used my name. What kind of horsesh*t is that? And here I am fixed to be charged and these guys, they investigated and saw that I wasn’t there. I was across the country. So then they were trying to find out who was using fake names. It was insane, man.”