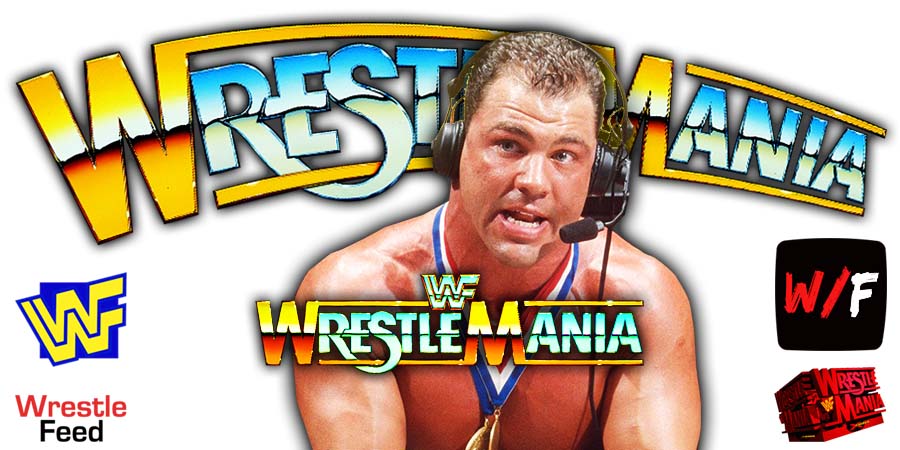 WWF Attitude Era Legend Kurt Angle was recently interviewed by former WWE wrestler Rene Dupree on episode of the ‘Cafe de Rene’ podcast, where our Olympic Hero revealed that in 2019 Vince McMahon actually offered him to stick around for another year and wrestle John Cena at WrestleMania 36.

Kurt wasn’t interested in waiting for another year to retire and put over Baron Corbin in his final match at WrestleMania 35 and retired from the sport of professional wrestling for good.

“When I presented to Vince McMahon that I was going to retire after WrestleMania [in 2019], I told him I knew that I was losing a step. I knew I wasn’t the same as before.

I didn’t like my performances and I said to Vince, ‘I wanna retire after this WrestleMania, but I’d like to ask you for a favor. I’d like you to put me with John Cena, because I started his career so I’d like him to end my career.’

He said, ‘Kurt, you have a program with Baron Corbin, it’s been going on for 6 months. You have to finish it. If you wanna wait till next year, I’ll give you John Cena next year.’

I told [him I couldn’t wait another year]. I totally understood. Vince was right, I was doing a program with Baron. It was going 5 or 6 months and I had to see it through. He did give me the option of going another year and wrestling Cena, and I probably should’ve done that looking back.

I probably could have just laid back and not wrestled for a good 6 or 7 or 8 months and started to get myself ready. I gained a lot of weight in this particular time, I could have got away from the product and got in better shape and then came back for WrestleMania and wrestled John Cena.”

While Kurt wishes he took Vince’s offer to wait another year for a match against Cena, that match would’ve ended up taking place in front of 0 fans at the WWE Performance Center at WrestleMania 36 due to the COVID-19 pandemic.

So, it’s safe to say that Kurt made the right choice, as he got to retire in front of over 82,000 fans at WrestleMania 35.

Also Read: “They wanted to protect Undertaker” – Kurt Angle On Him Getting Pinned In A 2002 PPV Match

Today would have been the 58th birthday of Old School WWF Attitude Era Diva Nicole Bass.

At WWF WrestleMania XV in 1999 she made her World Wrestling Federation debut as the female bodyguard of Women’s Champion Sable.

During Nicole’s final days with the promotion she was in a team with fellow WWF diva Ivory, before leaving the promotion for good.